The parents of junior high and high school students in the Flowing Wells Unified School District in Tucson are being asked to sign a contract agreeing to teach their children to settle arguments without violence. The “Student/Parent/Principal Contract For Eliminating Guns and Weapons at School” was sent as part of the district’s registration packet for the 2013-2014 school year.

Under the contract, parents must agree to teach “…including by personal example, my teenager about the dangers and consequences of the misuse of guns and weapons and I will keep any guns and all weapons under lock and away from school grounds and away from my children.”

According to the district, two parents have expressed concern with the contract. One father requested that the contract be returned to him after he had given his consent more thought. District officials say there will be no consequences for refusing to sign the contract.

The district said that it was never their intention to govern behavior at home. The district’s superintendent, Dr. David Baker, said he has a great deal of confidence in the district’s parents and regrets that any of them might take the contract’s wording the wrong way. He said that the contract was written years ago, and although officials do review the registration materials, the contract slipped through the review process.

It is believed the contract was developed under the leadership of the district’s former superintendent John Pedicone. Pedicone left Flowing Wells as the district’s shortest serving superintendent. Years later, he took over the reins at the Tucson Unified School District where he led the district in the fight to preserve it’s resegregating Mexican American Studies classes. Those classes were found to violate Arizona law for promoting resentment against whites and in Hispanic students.

“It is important that people understand the district in context,” said Baker. “We have great parents and kids.” Baker said that he has no reason to believe that the district’s parents need to be taught how to raise their children.

The district has not had an issue of guns on campus or gun violence according to one staff member who has been with the district for ten years.

Baker pointed out that over 200 kids expressed an interest in Junior ROTC, and 150 of them are now members. He also noted that the district has a junior rifle team.

Officials say that they talked to the father who had misgivings and believe that the matter was resolved to his satisfaction; however, the district’s superintendent will review the form with staff and see what changes and clarifications should be made to avoid confusion in the future.

The contract’s requirement that their weapons must be “under lock” raised concerns with many Southern Arizona residents. In Arizona, which has an Open Carry Law, it is generally not considered ill-advised or unusual, especially in the rural areas, to carry a weapon on your person. The provision in the contract which requires that parents keep their weapons, including shot guns and hunting rifles away from their teenagers, is of concern for many.

The group, Gun Owners of Arizona, is asking the parents in the district to let them know “if your child’s school asked you to sign a document with a ‘Lock Up Your Safety’ provision or any other anti-RKBA provision.”

One friend of the group posted on Facebook, “Wow….parents need to tell them to shove that paper where the sun doesn’t shine! Who are they to ask this of parents? Stick to reading , writing, and arithmetic……that’s what they’re paid to teach. If they want to teach gun safety…then they should start a gun club like some schools did in the past!”

Although the policies are not included on the contract, the contract requires parents to “support the school’s policies to eliminate the misuse of guns and weapons on school grounds and work with the school in developing programs to prevent violence.”

Perhaps the most disturbing provision in the contract for Tucsonans is the requirement that parents must “carry out my responsibility to teach my children how to settle arguments without resorting to violence and to encourage him/her to use those ideas when necessary, and to follow school guidelines for reporting guns and weapons they see on campus to an appropriate adult.”

The district does not specify the ideas the parents must utilize. Baker said that the idea they hoped the parents would discuss is the concept that guns do not belong on campus. 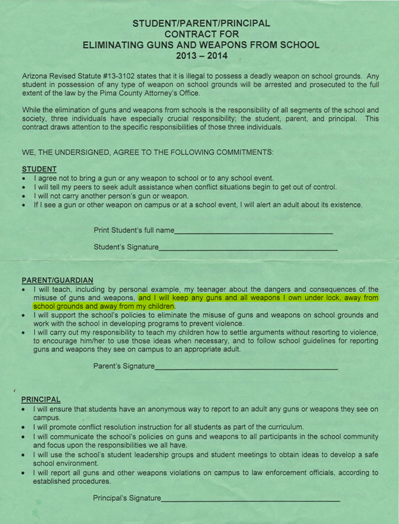