The Red-tailed hawk is probably the most common hawk in North America. Its winter range includes most of the United States and Northern Mexico, and its summer range extends into most of Canada. 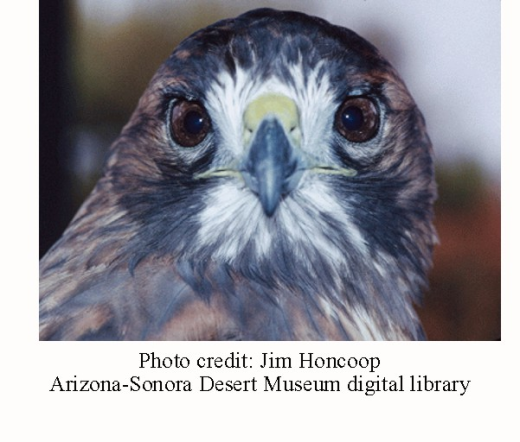 Only the adults have the distinctive red tail. Tails of the juvenile birds are light brown that gradually turn red as they mature. Adults have a wingspan of about 49 inches and a body length of about 19 inches. Females are longer than males. 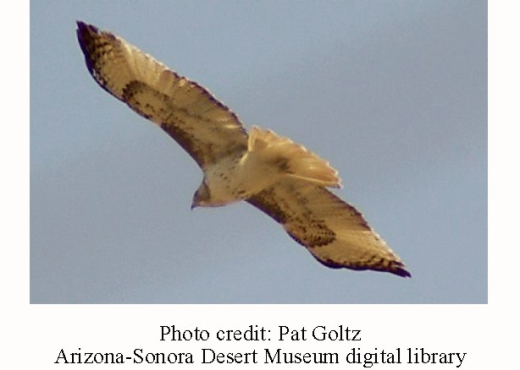 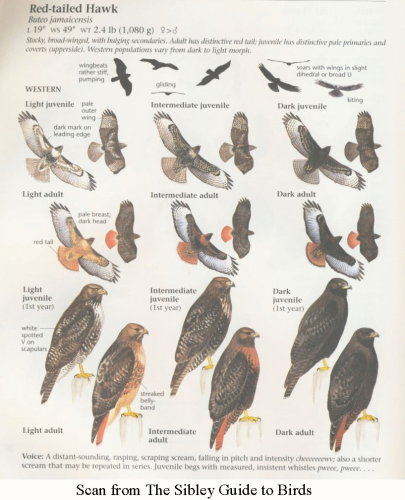 Red-tailed hawks are versatile. They inhabit deserts, woodlands, plains, riparian areas, and open areas. Their main prey are rodents, rabbits, and squirrels. They also take other birds such as pheasants, quail, and blackbirds. They will eat snakes and carrion also. They can take and fly off with anything up to about five pounds. They often perch high and wait for prey to show up or soar on the breezes to scan their territory.

Red-tailed hawks often hunt alone, but they also hunt in pairs, especially when they are after squirrels in a tree. They will guard a hunting area and frequently chase off other hawks, eagles, and Great Horned Owls.

According to the Cornell Lab of Ornithology, “Courting Red-tailed Hawks put on a display in which they soar in wide circles at a great height. The male dives steeply, then shoots up again at an angle nearly as steep. After several of these swoops he approaches the female from above, extends his legs, and touches her briefly. Sometimes, the pair grab onto one other, clasp talons, and plummet in spirals toward the ground before pulling away.”

“Both members build the nest, or simply refurbish one of the nests they’ve used in previous years. Nests are tall piles of dry sticks up to 6.5 feet high and 3 feet across. The inner cup is lined with bark strips, fresh foliage, and dry vegetation. Construction takes 4-7 days.” They build the nests in the crowns of tall trees, on cliff ledges, and on structures such as billboards.

According to the Arizona-Sonora Desert Museum, Red-tailed hawk populations are stable and even increasing in some areas. How long do they live? Cornell claims, “The oldest known Red-tailed Hawk was 28 years 10 months old.” I’m guessing that bird was in captivity, how else could they know its exact age? I suspect that life-span in the wild is much shorter, probably closer to 7-10 years. Among birds of prey, it is estimated that the mortality rate is as high as 80% during the first year of life due to predation, disease, and starvation. If they make it through the first year to reach adulthood, they can expect a longer life. Many of the birds I handle at the Arizona-Sonora Desert Museum are in their teens, senior citizens of the bird world.