As the weather gets cooler, many critters seek shelter inside. That includes scorpions. Recently I found a bark scorpion walking across my bedroom floor.

Scorpions have been around for about 400 million years. There are over 1,700 described species of which 30 species live in Arizona. The stripe-tailed scorpion is the most common in Arizona, followed by the bark scorpion, and the giant hairy scorpion.

Scorpion mating is a dangerous game because either one may eat the other. Mating does not involve primary copulation.

Rather the male deposits a sperm packed on the ground and engages in an elaborate “dance” with the female to maneuver her over the packet. She then takes it up and may store it internally for months. She gives live birth and the newly hatched young ride on mom’s back until their first molt. 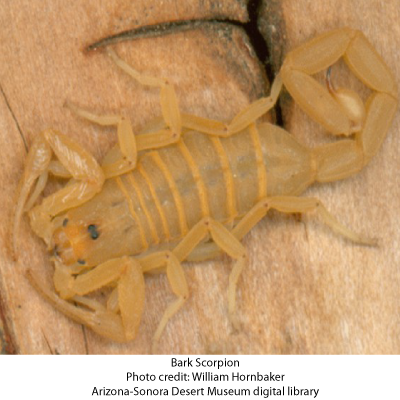 In Arizona, only the bark scorpion has venom potentially life-threatening to humans. About 25 other species throughout the world have dangerous venom. The sting comes from the tip of the tail (the telson). The sting of a bark scorpion is about as painful as that of a bee or wasp. Symptoms of envenomation include numbness, frothing at the mouth, difficulties in breathing (including respiratory paralysis), muscle twitching, and convulsions. Deaths are rare (unless you are allergic to the venom). There is an antivenom available.

The bark scorpion (about 2 two inches long including tail) is the only one in Arizona that prefers to climb and it can cling to the underside of objects (like a piece of bark, a rock, a shoe, a piece of clothing, or a ceiling). In the house, they may get trapped in a sink or bathtub, or hide in dark areas of a closet. Outside, they may be in any loose pile of debris. The bark scorpion is the only one tolerant of others of its kind, so may live in large groups, especially in winter. Bark scorpions have long, slender pinchers which usually distinguish it from the other, stouter scorpions in the state.

The stripe-tailed scorpion is about two inches long and its stout tail is marked with dark ridges running lengthwise along the underside. These scorpions occur in a variety of habitats and hunt at night. They usually hide under rocks during the day. 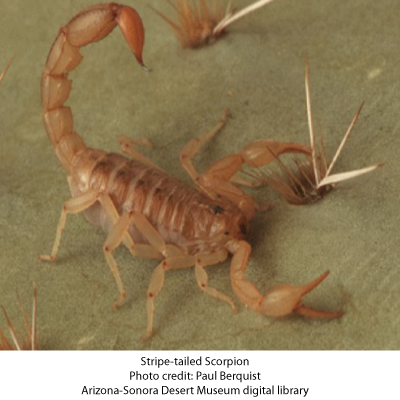 The giant, or desert, hairy scorpion gets up to six inches long. It really doesn’t look hairy, but like all scorpions, it sports tiny hairs that help it sense vibrations. This scorpion burrows in the soil, trying to follow the moisture line. Some burrows are as much as eight feet deep. The Arizona-Sonora Desert Museum says, “A giant hairy scorpion frequently assumes a strong defensive posture when threatened, curling its body and tail high overhead and spreading its pincers. The stinging action is swift and well directed, but the sting is mild, causing only local pain and swelling.” 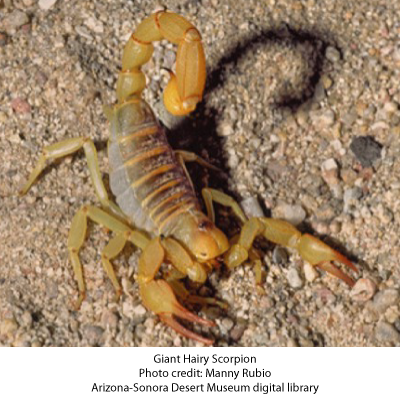 Scorpions contain a substance in their exoskeleton that makes it impermeable. It also causes scorpions to fluoresce under ultraviolet light. If you take a black light out on a summer night, you might be amazed at how many scorpions are around.

Next time we will examine related critters, the vinegaroons and sun spiders.

Thirteen venomous animals of the Southwestern desert. Which is the most dangerous?