Pima County’s Sonoran Desert Conservation Plan (SDCP) has been touted as one of the best and most comprehensive habitat conservation plans in the country. Planning began in 1998 in response to the 1997 listing of the Cactus Ferruginous pygmy owl as an endangered species. The owl was removed from the endangered species list in 2006 because the listing was found to be based on flawed science. In my opinion, SDCP itself is based on flawed science as I explain below.

I was involved in the early stages of SDCP. For 5 years, beginning in 1998, I was a member of a Citizen Steering Committee that was formed to address concerns of various stakeholders and satisfy a Fish&Wildlife Service (FWS) requirement for public input. During that time, I attended many meetings and collected 35 CDs full of reports and other information. You can read most of the reports at the County’s dedicated website. (Caution, files are very large.)

The legal idea behind SDCP was to obtain dispensation from FWS in the form of an Incidental Take Permit under section 10 of the Endangered Species Act. The idea was to allow county public works to proceed even if they would incidentally harm some endangered species. To do that the County had to specify which species it was going to protect and how it would do so. SDCP would allow private land owners to opt into the plan and come under its umbrella, but there were strict requirements for land use.

The County’s plan has had a long gestation period, much longer than normal for habitat conservation plans in general. Pima County is acting as if the plan has been approved in its land use policies, but because the plan has not yet been approved, private land owners get all the restrictions but none of the alleged benefits. In anticipation of plan approval, Pima County has purchased several ranches, thereby taking them out of the tax base for the County.

The last I’ve heard of progress was a December, 2012, FWS announcement that sought public comments until March 15, 2013. “Pima County has applied for a permit under the Act for incidental take of 44 species, including five animal and two plant species currently listed under the Act.”

According to FWS, both federally listed and unlisted species can be covered in the incidental take permit acquired through a Habitat Conservation Plan (HCP) if issuance criteria are met. The three principal criteria are: 1) that impacts are mitigated to the maximum extend practicable; 2) sufficient funding (taxpayer dollars to pay for land acquisition and monitoring for the life of the permit) is assured up front; and 3) the issuance of the permit won’t jeopardize the species. Note that all species named in the HCP will be treated by FWS as if they were listed as endangered. The County’s purchase of local ranches is part of its mitigation scheme to satisfy FWS. In reality, the plan gives the County tighter control over use of private land.

The plan could have been relatively simple and deal with only those endangered species likely to be affected by growth in the County. If it had done that, the plan could be in place now. However, Pima County had loftier ideas: “The biological goal of the Sonoran Desert Conservation Plan is to ensure the long-term survival of the full spectrum of plants and animals that are indigenous to Pima County through maintaining or improving the habitat conditions and ecosystem functions necessary for their survival.”

As I stated above, in my opinion, SDCP is based on flawed science. I am not alone in that opinion. The Town of Marana and City of Tucson both refused to become parties to SDCP because of their concern with the scientific justifications.

Besides the Citizen Steering Committee, the County recruited biologists, both private and university professors, to form a Science and Technical Advisory Team (STAT). In March, 2001, STAT produced its major report entitled “Priority Vulnerable Species: Analysis & Review of Species Proposed for Coverage by the Multiple-Species Conservation Plan.” I will refer to that report as PVS.

At a public meeting on March 22, 2001, Dr. William Shaw, head of the county’s Science and Technical Advisory Team said of the team’s data, “biological knowledge is woefully inadequate,” a sentiment echoed by each speaker, and by a peer review committee which evaluated STAT’s work.

In addition to the above classifications, SDCP proposed to have “Recovery Areas,” “Recovery Contribution Areas,” and “Supplementary Population Management Areas.” For lands within the Conservation Lands System, the county will require “rigorous site analysis” prior to development. SDCP also proposed to restore riparian areas by planting hundreds of trees which the county estimates will use up to 2.6 billion gallons of water annually. In subsequent iterations of the plan, these restriction percentages may have changed or become obfuscated, but they have been largely incorporated into the County Comprehensive plan.

The land classification system was put together based on opinion and computer modeling. Here is how they did it.

The STAT team didn’t do any actual field work or checking of ground truth, they instead resorted to data mining. One problem with data mining, i.e., using large data sets from other studies, is that the data are rarely, if ever, verified for accuracy. Another problem is that data mining lends itself to selective extraction of data that might not be representative of the original study.

The methodology, as described in PVS:

Habitat distributions for many of the vulnerable species are poorly known and published accounts of known populations are few; therefore, habitat modeling based on environmental characteristics was conducted in order to provide the most complete, scientifically based depiction of species habitat. Recognizing the critical knowledge of many Pima County biologists, these ‘expert reviewers’ were asked to be part of the modeling process. Reviewers identified key environmental variables describing habitat and helped Geographic Information Systems (GIS) analysts score environmental characteristics for each species. Analysts then built GIS models based on these environmental parameters resulting in maps of high, medium, and low potential habitat. Biologists were then asked to review habitat maps and revise model parameters if necessary. This iterative process of GIS analysis and biological review resulted in refined models that more closely represented vulnerable species habitat.

Variables used in the models are vegetation/land cover, streams, shallow groundwater, springs, elevation, slope, aspect, land form, cave/mine potential, geology, and soils. A total of 115 characteristics for these 15 variables were scored as potential habitat for each species. Characteristics of these variables are well-understood for some species (such as a fish requiring a perennial stream), but many are not. In some cases, a ‘best guess’ was recorded in the table cells of the species-environment matrix. All scores have been reviewed and revised by species experts.

County biologists based their map overlays, their GIS data layers, on the opinions of 13 biologists and upon a fourth data set, the federal government’s GAP program which uses satellite imagery to, among other things, map vegetation cover. The assumption is that vegetation type can be accurately associated with species requirements and therefore species habitat.

GAP, run by the U.S. Geological Survey, is an ambitious program. But, it is instructive to note some of the comments from those involved. According to GAP Analysis Bulletin No. 8, “what was lacking [in GAP], and continues to be, is the information on species associations with those land characteristics.”

The GAP program ran into problems when it attempted to validate the model by gathering factual field data such as finding the critters and then mapping land characteristics where the critters actually occur.

From the Bulletin:”GAP researchers have generally believed that sampling for species occurrence has been biased and grossly incomplete; therefore, the points used in the quantitative approach may give incomplete or biased distributions.”

In other words, the limited real data collected do not support the model very well. There often was a big difference between modeled potential habitat and actual habitat.

The PVS report was the result of the biologists’ best guesses, “woefully inadequate” real data, and computer manipulations. And the results showed it. The report had many conflicting statements and some very strange recommendations.

For instance, take a look at their findings for the Lesser long-nosed bat:

“The lesser long-nosed bat requires 5,320 acres for a home range. The minimum patch size for 250 pairs is approximately 1,330,000 acres. The minimum number of patches for this species in the reserve system is 10; therefore, the population viability goal is to conserve at least 13,300,000 acres in order to maintain a viable population.”

So, county scientists, after applying “the best available science,” recommended preservation of 13.3 million acres in Pima County for this one species. Trouble is, the total area of the County is 5.9 million acres. 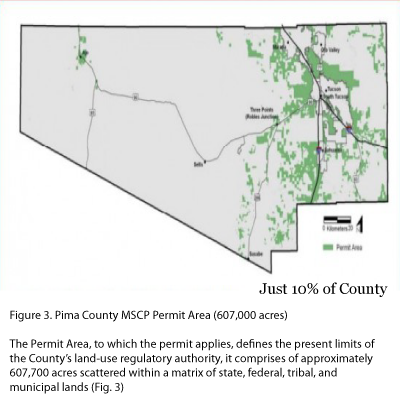 There is another problem with this recommendation. According to the report, “estimates of populations in maternity roosts range from 200 to 130,000 (USFWS 1995).” If we multiply just one large roost worth of bats, say 130,000, by the 5,320 acres which county scientists claim each bat needs for a home range, we get a total home range requirement of 692 million acres, or nearly 10 times the total area of the entire State of Arizona. These errors derive, of course, from rote calculation of the subjective habitat scoring system in a computer model which has, apparently, not been checked for ground truth, or even common sense.

I did point out these errors to county officials. As far as I can tell, the county did not significantly modify the land classification system. However, I noticed that in subsequent reports, they did not publish numbers anymore, only general, ambiguous statements.

The Section 10 Incidental Take Permit will apply only to unincorporated County land. It cannot be legally applied to land within incorporated areas, nor to federal land, nor to State Trust land, nor to Indian Reservations. That leaves a highly fragmented area which in reality cannot form an integrated habitat, see map below.

Pima County has gone through the motions to obtain a permit, but the flawed scientific basis and reality of land fragmentation make the Sonoran Desert Conservation plan an empty showpiece, one that is costing, and will cost, taxpayers money, and restrict use of private land.