Jojoba, (pronounced ho-ho-bah), Simmondsia chinensis, is an evergreen desert shrub that is usually about five feet high and wide, but can grow up to 10 feet tall. There are male and female plants usually with the ratio of four males to every female in Arizona. Only the female plant bears “fruit.” The leaves of both male and female plants are grayish-green, usually just over one inch long and usually stand vertical to the ground.

The vertical leaves are an adaptation to desert heat. Heat slows down photosynthesis, but since the leaves are vertical, they catch the full sun only in the early morning and late evening but not during the hottest part of the day. 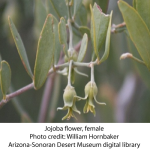 The male flowers are small ball-like greenish yellow clusters. The green female flowers are single. The jojoba is wind-pollinated, and the orientation of the leaves help create vortexes in the wind which aid in pollination. Flowers appear in winter and the mature seeds develop in spring and summer. Mature seeds in their shell resemble acorns, so they are sometimes called nuts.

Jojobas occur naturally throughout the Sonoran desert where rainfall exceeds five inches per year. They also occur in the coastal ranges of California.

Jojoba is the second most economically valuable native plant of the desert (after Washington palms). The reason is that jojoba seeds contain about 50% ‘oil” which is actually a liquid wax. Because it is a wax rather than an oil, it does not get rancid.

Jojoba “oil” is very similar in properties to sperm whale oil which it has replaced. The “oil” is a high-quality lubricant, can stand temperatures up to 570 degrees F, and is used in many industrial applications especially in computer and other electronic applications. It is also used extensively in cosmetics. 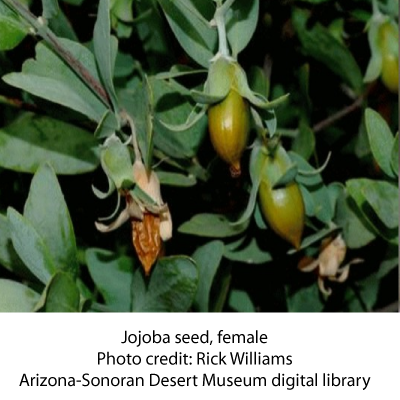 The “oil” itself is odorless, colorless to slightly yellow, and penetrates skin easily, making it a great skin lotion. It also has anti-fungal and antimicrobial properties. The O’odham Indians use a paste of the seed as an antioxidant salve on burns. The Seri Indians, who were masters of obtaining food in the desert, did not regard the seeds as food but used it in emergencies as an appetite suppressant. It has a strong laxative effect in humans. According to WebMD, jojoba “oil” is also used effectively for acne, psoriasis, sunburn, and chapped skin. In the early 1700s, it was brought to Spain and promoted as a cure for baldness, but there is no evidence that it works for that purpose.

Jojoba “oil” was used by native people as a cooking oil. Because it is indigestible, it contains no digestible calories. However, there is a debate on internal use of jojoba seeds and “oil,” and some medical authorities recommend against internal use. The “oil” contains 14% erucic acid. In high doses, erucic acid is toxic to humans. Drugs.com reports that it has been linked to myocardial fibrosis (Note: there was a similar concern about canola oil. Originally canola was made from wild rapeseed which contains up to 45% erucic acid, but canola oil is now made from a cultivar that contains less than 2% erucic acid and is deemed safe by the FDA).

Jojoba foliage is grazed upon by many animals including deer, javelina, bighorn sheep, and livestock. Seeds are eaten by many animals, including squirrels and other rodents, rabbits, and larger birds. However, only Bailey’s pocket mouse is known to be able to digest the wax.

Jojoba is now grown on farms for commercial purposes. It is relatively expensive because it must be harvested by hand, and the seeds don’t all mature at the same time.