A group of hills including Sentinel Peak (aka “A” mountain) and Tumamoc Hill lie just west of Congress Street near downtown Tucson.

Sentinel Peak sports the “A” of the University of Arizona, and Tumamoc Hill is home to the Desert Laboratory, established in 1903 to study desert ecology. The hills have a long history of human occupation. Ruins of a 2,300-year old village sit atop Tumamoc Hill. 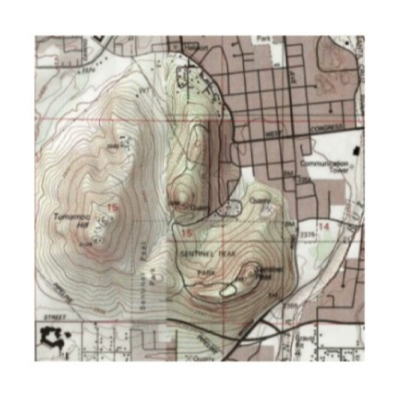 Many people like to hike the road up Tumamoc Hill or Sentinel Peak for exercise. If you are one of these people, exercise your mind as well and take a look at the rocks as you come back down the hills. The guide below tells you what you will see.

These hills, composed of volcanic rocks, have a conical shape with a low area in the middle leading some people to think they form a volcano. But the hills are really an erosional remnant of volcanic flows about 20- to 30 million years old, which once extended west to the Tucson Mountains and east into the valley towards downtown Tucson. These rocks overlie other volcanic rocks about 58 million years old, which are exposed along the talus slope on West Starr Pass Boulevard (22nd Street).

The Arizona Geological Survey has a digital geologic map (DMG-29) and short explanation of the volcanic rocks. Following is an (abridged) description of units from top to bottom, my comments are in brackets [ ] . The unit symbols refer to those on the geologic map. 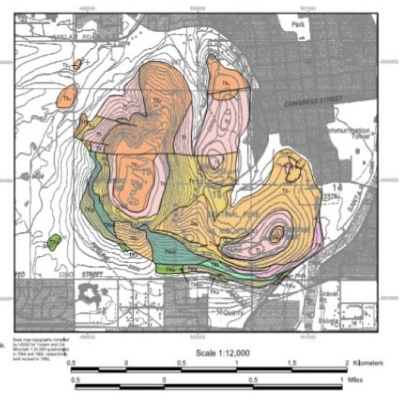 The younger volcanic series forms the bulk of the hills:

Tt Tumamoc tuff (pink on the map)
(~26-28 Ma) A 30- to 36 m thick gray tuff containing sanidine and lithic fragments. [This deposit is from an explosive eruption.]

Tb1 Basaltic andesite (light orange on the map)
(~26-28 Ma) Basaltic andesite, with olivine phenocrysts, locally vesicular to scoriaceous. [Rock quarried from this unit went to build foundations and walls of many University of Arizona buildings and homes in the Menlo Park area.]

Tc Conglomerate (straw yellow on the map)
( ~26-28 Ma) Pebble to cobble conglomerate, locally with boulders up to 70 cm diameter. Clasts consist primarily of mafic volcanic rocks and could all be locally derived. [This is a sedimentary deposit which signifies a break in eruptions.]

The age of these rocks was determined by K/Ar analysis, that is, measuring the ratio of potassium to argon. Potassium is radioactive and decays to argon.

The older volcanic series (blue and green) is exposed only on the south flank of the hills along 22nd Street:

An underground ridge of these older volcanic rocks extends eastward toward the Santa Cruz River and once forced water to the surface to produce a well-watered agriculture plain east of the hills, that was used for about 4,000 years up until the 1930s.

Tumamoc Hill and Sentinel Peak have a rich archaeological history. For a history of occupation and culture, the University of Arizona has a dedicated website. Another brief history is here.