Saginaw Hill is located about 10 miles southwest of downtown Tucson. See general location on the map below. 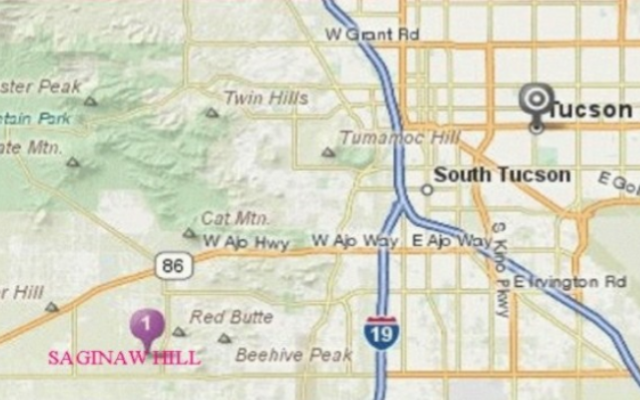 The hill was home to several mines worked intermittently from the late 1800s to the mid 1900s. For a long time, Saginaw Hill was a prime mineral collecting location.

(Note to readers: This article refers to several rock types. For links to good descriptions of rock names, see the Rock Naming Page at my Wryheat blog.)

A former small surface and underground mine owned at times, or in part, by the Saginaw Mining Co. and the Tucson Arizona Copper Co. The mine produced copper, zinc, lead, silver, gold, and molybdenum.

Mineralization is sparse, spotty, partly oxidized base metal sulfides along fissure zones in limestone lenses in silicified arkose. Ore control was quartz veins as siliceous replacements along fractures. Alteration included limonite, quartz, sericite, clay, pyrite, and garnetization-epidotization. Associated igneous rocks include rhyolite and latite porphyries, and altered quartz monzonite. Chalcopyrite and pyrite occurred on the west side of the Saginaw property, copper oxides on the east side at the Papago Queen mine. Cerussite and galena occurred on the south end of the property along a rhyolite-limestone contact. The identified ore zone is 330 meters long.

Workings include shafts, pits, and minor underground workings. Sporadic mining occurred prior to 1900 with a possible 100 tons of low-grade ore produced. Siliceous smelter flux was produced from 1956-1959. Prospect workings are concentrated along N60E trend but no good fracture zone is exposed.

Mineralization is disseminated copper oxides and carbonates with minor molybdenum oxides in quartz veins and along fractures in a weakly altered, brecciated, and mineralized Laramide porphyry stock.

Workings include tunnel and open cut operations. Sporadic production of copper ore occurred from 1917 to 1934, and of smelter flux in 1956 through 1959. Total output was some 3,700 tons averaging about 1% copper and 0.5 oz/t silver.

This area had long been a favorite of mineral collectors. It is one of the few places in the world where peacock-blue cornetite is found. Cornetite is a copper phosphate with the formula Cu3(PO4)(OH)3. 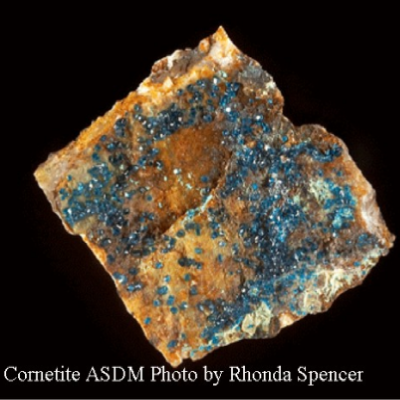 The Saginaw Hill mineralization may be related to the big copper mines west of Green Valley to the south, although the relationship is controversial. 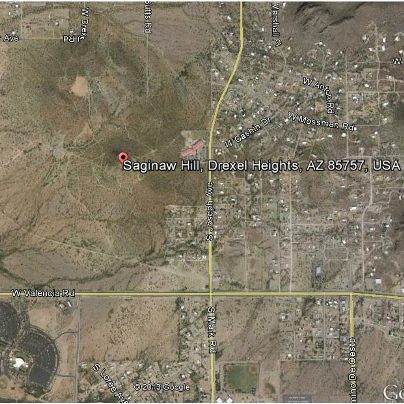 In the photo, the red-roofed building near the center is Johnson Elementary School. The buildings on the bottom left comprise Casino del Sol.

Because subdivisions were encroaching on the area, Pima County investigated Saginaw Hill in about 1988 with the view of turning it into a park. At the time, the mines were abandoned but there were mineralized dumps on the property. An assessment of the property by Pima County officials found (surprisingly to them apparently) that the area contained concentrations of toxic heavy metals.

The County made several more assessments and by 2003, the Bureau of Land Management (BLM) got involved. See the BLM report here, it provides many photographs. In 2005, while the BLM was deciding what to do, there was much furor in the local press.

The BLM filled in the many mine shafts which did pose a danger. They also collected surface mineralization and dumps and buried the material on site to mitigate the imagined danger of heavy metal contamination. The tan patch northwest of the hill is were the material is buried. Saginaw Hill is now closed to mineral collectors.

For more stories of mines in or near Tucson, see: