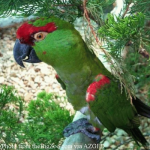 When one thinks of the desert, one does not usually think of parrots, but there is/was a species of parrot living in Southern Arizona, the Thick-billed Parrot (Rhynchopsitta pachyrhyncha). You can see some at the Arizona-Sonora Desert Museum. The Thick-billed Parrot is one of only two parrot species native to the United States; the other was the Carolina Parakeet (Conuropsis carolinensis) which is now considered extinct.

The Thick-billed Parrot is 16 inches long with a wingspan of 32 inches and weighs about one pound. It is dull green with red on the bend in the wings, lower thigh, forehead, and eyebrow. The legs and feet are gray; the beak is black.

Pine seeds are primary food for the parrots. The parrots are nomadic within highland pine-oak forests between the elevations of 6,000 to 9,000 feet in search of the seeds. They also eat fruit, something that got them into trouble with farmers. They have also been observed eating buds, acorns, juniper berries and tree bark.

Thick-billed Parrots nest in cavities and the females lay and incubate two to four eggs in June and July. The females brood and feed the chicks while the male brings food to the nest until the chicks fledge in September or October.

At one time these parrots occurred in large flocks in the Chiricahua Mountains in Southern Arizona. Historically, they occurred as far north as Payson and Flagstaff during the summer breeding season. The current known breeding ground is in the mountains of Chihuahua and Durango, Mexico as shown on the map below. 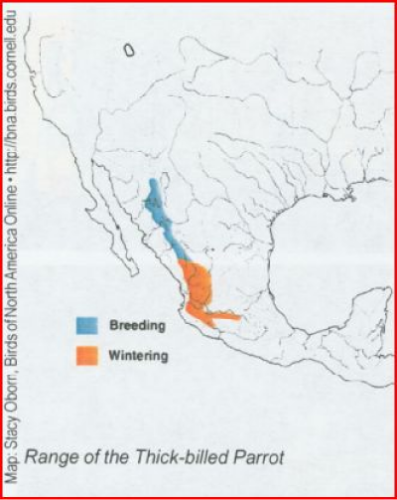 Thick-billed Parrots are preyed upon by raptors. Their main defense against predation was use of complex flocking patterns and large numbers to confuse the predator. However, the Thick-billed Parrot is highly gregarious and noisy, and relatively large and tame, characteristics making them especially vulnerable to hunting. They were hunted for food during the 1800s and early 1900s which reduced their numbers. Reduced numbers made them easier prey for raptors. Thick-billed parrots are now thought to be extinct in Arizona as a breeding population, although there may be individuals that come from Mexico. The last large flock of Thick-billed Parrots seen north of the Mexican border was observed in 1938, in the Chiricahua Mountains.

Several attempts were made to reintroduce the Thick-billed Parrots to Arizona in the 1980s and 1990s, but these attempts were apparently not successful. The captive bred parrots did not know how to forage in the wild and the small numbers made the parrots susceptible to predation by raptors. You can read about the failed reintroduction effort in a New York Times article (1995) here.

New Mexico Game and Fish reports sighting a Thick-billed Parrot on one of Ted Turner’s ranches in northern New Mexico in 2004. It is unknown whether any still exist in the wild in Arizona.

The Thick-billed Parrot is listed as endangered by the Arizona Game and Fish Department and is on the Mexican Endangered Species list.

Other ADI articles on birds of the desert: