The mainstream media and the Arizona Daily Star are in their usual “gloom and doom” mode because a few glaciers in the Amundsen Sea of West Antarctica are flowing faster than they have been and hence calving ice into the sea. This glacial behavior has been known for some time. The current turmoil was precipitated by recent publication of two papers based on data collected between 1992 and 2011.

Is it just coincidence that this story is being hyped now, closely following release of the latest National Climate Assessment Report by the Obama administration? Is this just an attempt at “climate diversion” away from other issues? (See my Wryheat article: National Climate Assessment Report = Science Fiction and Politics). Anthony Watts has some comments and links to the science on his WUWT blog.

I have yet to see any of the mainstream media mention the fact that Antarctic sea ice is currently at or near an all-time high extent (see article here).

The “gloom and doom” part of the “collapse” story is speculation that glacial calving will cause an undue rise in sea level. Studies show, however, that this “unstoppable collapse” will take hundreds to thousands of years and might possibly cause a sea level rise of 1.5 feet per century. Does that worry you?.

To put things in perspective, let’s look at some geography and geology

First is a NASA illustration of the offending glaciers (colored red): 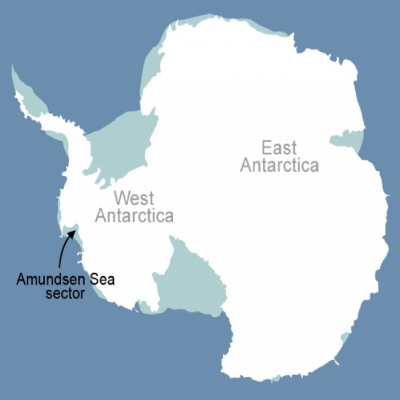 In the scheme of things, this is a very small area of West Antarctica that is “collapsing.”

I have some questions about the net effect of all this on sea level rise.

Glaciers move usually because more weight, i.e., snow, is piled onto the upper parts of the glacier and gravity causes it to flow. Were does the snow come from? Evaporation from the ocean which reduces sea level.

In West Antarctica, the glaciers are “grounded” below sea level and are therefore displacing ocean water. Since water as ice has more volume per weight than liquid water, melting of “grounded” ice should also decrease sea level.

Another NASA illustration shows that the bedrock in the entire area covered by these glaciers (brown in the illustration below) is below sea level. 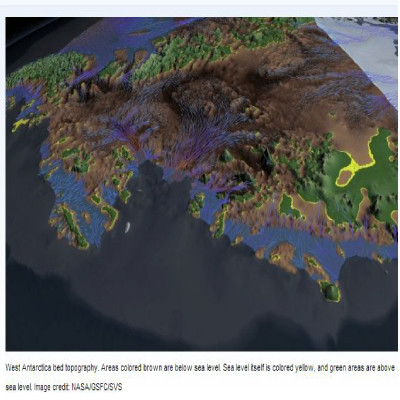 Floating ice already displaces its weight with an equal weight of water so the net effective on sea level of melting floating ice is near zero (Archimedes’ principle).

Only ice/snow that was always above sea level could raise sea level once it melted into the sea. How much is that compared to the evaporated water which produced the ice/snow on the upper parts of the glacier in the first place?