Spring flowers bring out the pollinators and their predators. I found one of those predators, a green lynx spider, lurking in the flower of a prickly pear cactus in my yard. Can you see the spider in the middle of the flower in the photo below? 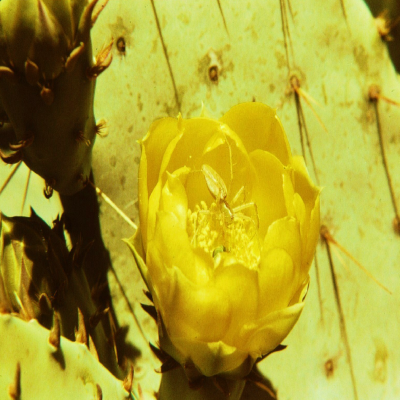 Rather than build a web to catch prey as some other spiders do, the green lynx spider lurks on foliage to catch prey. It pounces cat-like, hence its name “lynx.” Its color helps camouflage the spider. This is a fairly large spider; the body of a female can be nearly an inch long. The legs sport spiky hairs. This spider is big enough to tackle bees and butterflies.

As with most spiders, the green lynx spider paralyzes its prey with venom which also starts the digestion process. Spiders don’t have teeth, so the venom serves to liquify the prey so that the spider can suck up the juices.

In September and October, the female lynx spider will build a silk sac and lay up to 600 eggs. She guards that sac and new hatchlings ferociously until after their first molt.

The bite of a green lynx spider may be painful, but the venom is not harmful to humans. So, if you have flowering prickly pear cactus in your yard, go out a take a close look in the flowers and on the pads. Maybe you will see a lurking “lynx.”

See more photos of the green lynx spider at the Arizona-Sonora Desert Museum digital library. You will see that the color varies from bright green to dull greenish yellow.