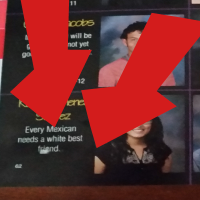 When the students of Sabino High School opened up their new yearbooks they were surprised to find little patches of black and yellow duct-type tape scattered across the pages. According to sources, the censors in Sabino’s administration must have scrambled to cover the ten “offensive” comments offered by mostly seniors with tape in time for graduation day.

As a result of the timely taping, students did not get a chance to pass their yearbooks around to their friends to collect signatures and more memories. Only after students had been dispersed like dandelion seeds in the summer breeze, did they discover that the $75 they spent on their timeless treasure included tape that would tear their tome if removed.

Once removed, it was difficult for recipients to ascertain what standards were employed by censors to determine which comments were unfit for high school students’ consumption. In a District which is determined to do as much as possible to divide children by race, it came as no surprise that the school’s administration would have covered a comment left by a Latina student which read, “Every Mexican needs a white best friend.” Her best friend’s comment could not be seen under the black tape that was stuck over it, but only can only imagine what it read.

Some speculate the comment might be something along the lines of ‘Every white person needs a Mexican best friend.”

Sanchez informed board member that he was getting copies of the book “with racist and unacceptable passages highlighted. Only in TUSD could the girls’ comments be considered racist, but apparently they were.

When asked about the censorship, TUSD’s Superintendent H.T. Sanchez did not define unacceptable. The District could employ United States Supreme Court Justice Potter Stewart who developed the test for obscenity in Jacobellis v. Ohio; you know it when you see it. 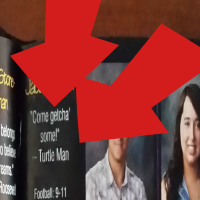 Some readers were shocked that TUSD administration did not cover at least one reference to God. However, they feel certain that had it been give the once over by the District’s central office administration, it would have been gone.

While the tolerated God, they found some metaphors to be unacceptable. One girl’s comment that she was “drunk on you and high on summer time” earned her the black tape of shame.

But it is the failure of the administration at the central office and at the school site that has at least two Governing Board members asking questions after they were contacted by students and parents. Board member Michael Hicks wants to know why the school would feel the need to censor such innocuous comments.

“It is inappropriate,” said Board member Michael Hicks. “We don’t know what the school administration was thinking but this does not seem fair to the seniors of Sabino High School. We fought hard to stop teachers from imposing their world view in our other schools’ classrooms. It should be wrong for all of our professionals. They paid $75 for a book and they put tape all over it.

Nothing I have read warrants what they have done. I think the District should apologize or give the kids their money back. The principal should have reviewed this before it went to the printer. If it offends his sensibilities for whatever reason, those reasons should be articulated to the students, and adults should have talked to them about their objections beforehand.”

TUSD board member Mark Stegeman said, “If the high school intended to censor the students’ quotations in the yearbook, then they should have done that before they sent it to the printer. As it is, the students got less than what they paid for, and they got it very late and missed the opportunity for inscriptions that is a big part of what makes the yearbook meaningful.”

TUSD works to move desegregation money away from classrooms 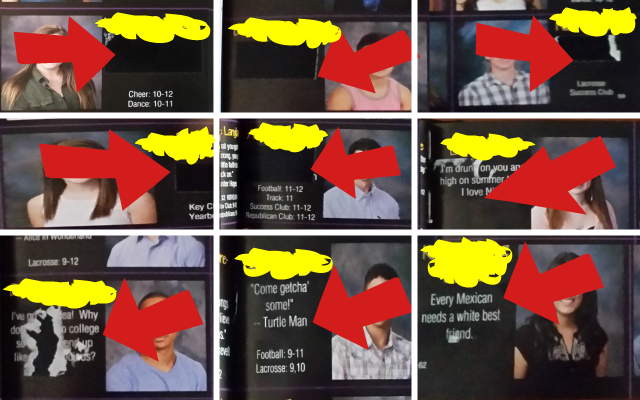 About M. Perez - ADI Staff Reporter 568 Articles
Under the leadership of ADI Editor In Chief Huey Freeman, our team of staff reporters work tirelessly to bring the latest, most accurate news to our readers.