The pea-sized chiltepin pepper (Capsicum annuum var. glabriusculum) is thought to be the ancestral plant of all chili peppers. It is native to Arizona, Texas, Florida, Mexico, and Central and South America. The chiltepin plant is a bush that grows up to four feet tall and it prefers well-drained sandy soil. 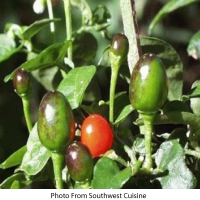 Chiltepins are very hot and the heat is said to be quick, intense, but not long-lasting compared to some other hot peppers. The heat is due to the chemical capsaicin which is an irritant to chemoreceptors in the skin and mucus membranes in mammals. How hot? The Scoville scale measures the amount of capsaicin in peppers. The amount of capsaicin in a particular plant depends on growing conditions, therefore, the Scoville scale presents a range of hotness. For comparison, Poblano peppers range from 1,000 to 2,500 Scoville units; Jalapeños range from 3,500 to 8.000; Serrano peppers range from 10,000 to 23,000; Cayenne and Tabasco peppers range from 30,000 to 50,000, Chiltepins range from 50,000 to 100,000; and the Habanero ranges from 100,000 to 350,000. Pepper spray, used for defense comes in at 5 million. (Pure capsaicin is 16 million on the scale.)

The chiltepin pepper is a fruit that seeks to disperse its seeds to reproduce. Why then would it make its fruit unpalatable to many animals that might disperse the seeds? The answer is that the chiltepin is selective. Mammals have the chemoreceptors that make capsaicin irritating; mammals also have big teeth that can crush the seeds. Birds, on the other hand, lack teeth to crush the seeds and lack the chemoreceptors and are therefore immune to the irritation. Birds eat the peppers and deposit the seeds (with a little fertilizer) away from the original plant. 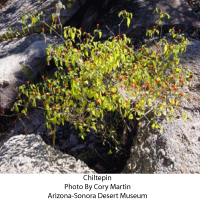 By the way, capsaicin is neutralized by animal fat. So, if a pepper is too hot for you, drink some whole milk or eat some butter or sour cream.

Chiltepins have long been used by native people to spice food and as a food preservative. Chiltepins were also used medicinally. The capsaicin is an antibacterial agent. The Pima Bajo people used chiltepins to relieve stomach disorders. The Mayo Indians mixed chiltepin leaves with alcohol to make a liniment for rheumatism. The Tarahumara Indians chewed the fruit with other plants for headache. Apparently capsaicin, when eaten, causes the brain to release endorphins, which are natural painkillers. Today, of course, you can buy capsaicin creams in the drug stores for topical pain relief.

Chiltepins have a good flavor; I prefer them when they are green. But if you try them, be prepared for the intense heat.