Painting roofs white is often touted as a great idea to fight global warming. Obama’s former Energy Secretary Steven Chu once pitched such a solution. While a white roof does keep an individual building cooler, there are some unintended consequences for general usage: white roofs may make arid regions dryer and increase energy consumption in cooler regions. Surprised? Read on.

Researchers from Arizona State University found that “warming resulting from megapolitan expansion is seasonally dependent, with greatest warming occurring during summer and least during winter. Among the most practical ways to combat urbanization-induced warming – the painting of buildings’ roofs white – was found to disrupt regional hydroclimate, highlighting the need for evaluation of tradeoffs associated with combating urban heat islands (UHI).” (See press release.)

The researchers do note: “Integration of highly reflective cool roofs within the built environment offsets about half of urban-induced warming, leading to small regional-scale cooling during the winter season.” But, “the combined effects of UHI-induced warming and evapotranspiration changes act in the same direction and reinforce one another” thereby making the already arid region dryer.

The researchers provide a caveat in the usual academic jargon: “While we consider our results robust, we recognize the value of a model intercomparison and differing parameterization selection … that could improve simulated diagnosis of uncertainty quantification.” Translation: we think we are right, but with computer models it’s garbage in, garbage out.

As part of the research for this article, I contacted a major national manufacturer of membrane roofing systems, mainly for commercial and industrial applications. That company (which prefers not to be named) produces both dark and white roofing systems. To my surprise, the company spokesman said that while white roofs may keep a building cooler, they nonetheless have some detrimental unintended consequences when used in cool climates. These unintended consequences include:

White roofs may keep the roof surface and building cooler, but, the heat has to go somewhere. Heat reflected from white roofs can cause the ambient air temperature above the roof to be hotter than it ordinarily would. That can effect the performance of air conditioning units in two ways. First, the higher temperature of the ambient air causes the A/C unit to work harder, using more energy.

Second, the electrical conduits feeding A/C units become less efficient when temperature rises, according to an article in IAEI magazine, a trade publication for electrical inspectors.

“The interiors of conduits in sunlight, such as those containing conductors feeding air conditioning units on rooftops, become significantly hotter than the outside air (which is always measured in the shade). Data show that these temperature differentials can easily reach 70°F, even when the conductors are electrically unloaded. Remarkably, the differentials were found to be essentially independent of the outdoor temperature all through the range from 70°F to above 100°F.”

“To determine the need for ampacity* corrections, these temperature differentials need to be added to the outdoor temperatures, which reach 90°F or higher in most areas of the USA during the summer months.”

[*Ampacity: the maximum amount of electrical current a conductor or device can carry before sustaining immediate or progressive deterioration. Ambient temperature and the ability to shed heat affect the ampacity rating.]

A white roof will reflect heat. If the building with a white roof is surrounded by taller buildings, that reflected heat impinges on neighboring buildings causing them to expend extra energy to keep cool.

White roofs keep buildings cooler (depending on the insulation). But, if you are in a northern climate that requires heating in winter, the heating bills will be higher. For instance, the graph below from the Department of Energy’s “Cool Roof Calculator” shows the additional heating expense for white-roofed buildings in Detroit: 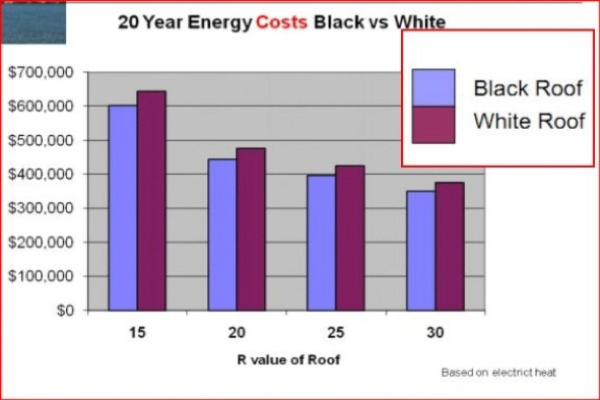 Because a white roof itself is cooler than a black roof, the white-roofed building is more prone to condensation build up inside the roof on winter days.

White roofs have to be cleaned to maintain their cooling effect. If the roof is not cleaned it loses the anticipated benefits.

Will white roofs provide a solution to the phantom menace of global warming? Probably not, but the idea may sound good. A 2011Stanford study, published in the Journal of Climate: “Effects of Urban Surfaces and White Roofs on Global and Regional Climate,” estimated that “worldwide conversion to white roofs, accounting for their albedo effect only, was calculated to cool population-weighted temperatures by ~0.02 Kelvin but to warm the Earth overall by ~0.07ºKelvin.” That study was computer modeling. The results depend on the assumptions, and, as the author says, “the range of uncertainty may be larger than the range of results provided here.” The paper concluded that white roofs may have a small impact on the urban heat island effect, but the impact is too small to affect global warming.

The point of this story is that rather than blindly following a politically-correct, one-size-fits-all eco-fad, do your homework to choose a system that is most efficient and cost-effective for your particular application. Also, we see that white is not necessarily green.

For some other great politically-correct schemes, see these posts on my Wryheat blog:

How Many Haz-Mat Suits Do You Need to Change a Lightbulb?

Cash for clunkers, an example of a stupid government program