Installation of solar and wind facilities has expanded almost exponentially in the last few years. The graph below, from an article in Energy Matters by Roger Andrews, shows this growth. 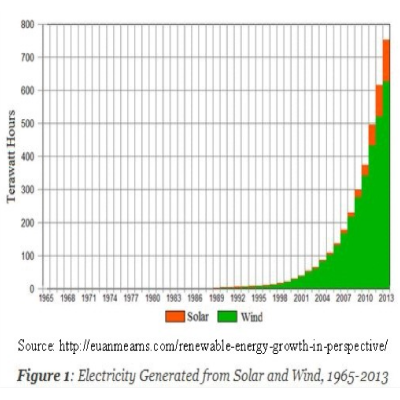 Quite impressive isn’t it? But what impact does it have on energy supply compared to total consumption? Andrews shows another graph which puts things in perspective:

You might have to look very closely at the very bottom right of the graph to see what wind and solar generation contribute to our total energy supply. In spite of the exponential growth in solar and wind installations, it has had almost no impact on the supply of electricity.

President Obama, with his “war on coal,” has promoted alternative energy schemes. Europe, especially Germany, has been way ahead of Obama’s policy, and have found out, the hard way, that Obama’s prediction is true: ” “under my plan…electricity prices would necessarily skyrocket.” (See The Price of Obama’s New Carbon Dioxide Emission Rules)

Pierre Gosselin, writing from Germany, says “It seems that it is beginning to dawn on some of Europe’s mainstream media: The transition to green energies is turning out to be ten or even 100 times more expensive than what they were led to believe just a few years ago.” “Already the EU 2020 strategy costs 185 billion euros annually. By the end of the century the costs will run to 15 trillion euros. With this, according to the UN IPCC, the global temperature increase will be lowered 0.05°C.” 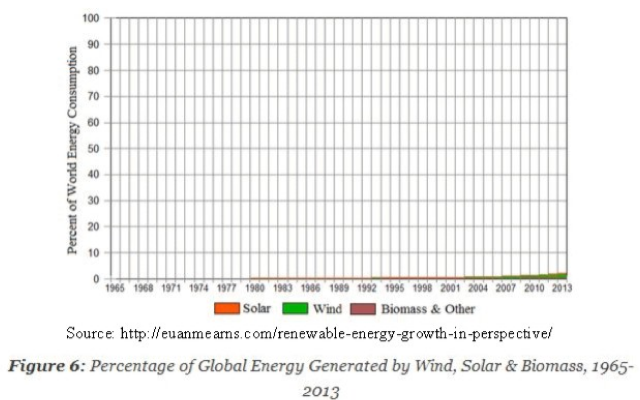 While solar and wind generation seem to have little impact on electricity supply, generation facilities have a large impact on the environment because both solar and wind installations take up large tracts of land. They also have a negative impact on wildlife. See Avian mortality from solar farms and from my Wryheat blog: Big Wind gets “get out of jail free card” from Obama Administration. They also have an impact on human health and well-being, see Health Hazards of Wind Turbines.

Back in Germany, Gosselin also writes that “The days of an open welcome to ‘environmentally-friendly’ wind parks in Germany are over.” “Developers To Clear 850,000 sq m[eters] of virgin forests on UNESCO nature reserve to make way for 700-foot turbines.”

Gosselin also reports that every month 10 wind turbines are destroyed by fire due to lightening strikes, damage to power cable insulation, and overheated gear-drives.

The Obama administration seems to behave hypocritically on energy policy because he promotes alternative energy in the U.S. but U.S. taxpayers are subsidizing fossil fuels in other countries. Kevin Mooney, writing at the Daily Signal, notes:

“Americans have to pay more for electricity and compete for fewer jobs because of President Obama’s regulatory curbs on fossil fuels at home, even as their tax dollars support expansion of those same energy sources abroad.

“The Obama administration last month rolled out its most recent brake on fossil fuels, a 645-page proposed rule to achieve a 30 percent cut in carbon dioxide emissions from power sources by 2030 compared to 2005 levels.

“At the same time, the administration pressed for reauthorization this fall of the U.S. Export-Import Bank, a federal agency that offers billions of taxpayer dollars for development of fossil fuels in Russia, Saudi Arabia, Turkey, Mexico and other countries.”

We live in interesting times.