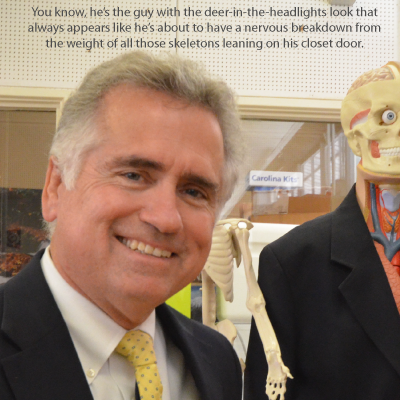 Anyone else get the Voter Education Guide created by the Arizona Clean Election Commission today?  It’s that magazine, newspapery looking thing you get in your mailbox right around election time where all the candidates put out their position statements in a last ditch effort to garner your vote just in case all of their campaign signs cluttering the intersections around the state didn’t annoy you enough already.

I’m a teacher, so I thought I’d check out the candidates for Arizona’s Superintendent of Public Instruction, or what most just call the head of our Department of Education.  I recognized the major Republican and Democrat candidates who, with the exception for Diane Douglas, are in support of the federal take-over of Arizona’s education system, AKA the Common Core.

But there was one guy I didn’t recognize at first. He looks like a younger version of that guy that had a psychological breakdown at a press conference after he was caught posting racist comments online anonymously.  You know, that creepy guy on campaign signs around town with his arms around a group of kids, the kind of man your parents tell you not talk to if approached?

What’s his name again? You know, he’s the guy with the deer-in-the-headlights look that always appears like he’s about to have a nervous breakdown from the weight of all those skeletons leaning on his closet door.

Yep, it’s little Johnny Huppenthal.  He’s the kid in your class that would steal stuff out of other kids’ desks and then when he gets caught he would do some sort of circular story-telling marathon of lies ultimately wearing you down to where you don’t even care if he’s the thief anymore, just make him shut up already.  You see little Johnny Huppenthal got away with his lies and deception for so long that it has become a way of life, a mode of survival for him.

I’ve seen Huppenthal at multiple candidate forums and heard him give multiple interviews where he continues his circular dance of lies talking, talking, talking until his audience forgets what he was talking about in the first place and just wants him to shut up already. It’s the same little Johnny, different classroom that I see in the voter education guide.  I really wish he was in my fifth grade classroom; I would have set him straight and saved our state’s children, parents, and teachers so much agony.

In his candidate position statement Huppenthal now claims that, he “supports standards and local curriculum…not standards imposed on Arizonans by the federal government.”

Funny, I remember being mandated by Huppenthal, as were all Arizona teachers, to take mandatory Common Core standards training all last year because many teachers were unable to understand the federally created learning standards.

My school was also mandated by Huppenthal to administer the federally created and privately owned, Common Core/PARCC field tests this past spring along with over a million other kids across the state and nation.

Huppenthal’s candidate statement goes on to claim he “ensured the privacy of student information.”  There you go again little Johnny.

Huppenthal presided over the implementation and expansion of the Common Core’s NSA-like data suctioning systems (SLDS) that has been suctioning all manner of your family and your kids’ personal information from the classroom directly up to the U.S. Department of Education and private companies, all without parent permission or notification.

What conservative gives sovereignty of education over to the federal government and installs NSA-like data suctioning devices in our kids’ schools?

In her candidate statement, Diane Douglas, who is challenging Huppenthal in the GOP primary for Superintendent of Public Instruction, calls him out squarely when she states, “He is a willing partner with Obama in the federal takeover of our schools; including data mining and tracking of our children that are part of Common Core.”

Diane Douglas closes her candidate statement by clearly, unequivocally stating, “We must protect our children’s privacy; our educational sovereignty.”

You remember what happens in class when the little classroom thief/liar gets called out, caught by another classmate who has a sense of decency and goodness don’t you?  Yep, little Johnny the thief/liar blames that person for exactly what he is guilty of.  It’s frustrating as hell to watch initially, but eventually the thief/liar is exposed for who and what they are, a dirty little liar and a thief.

Huppenthal is hoping to muddy the very decent, principled Diane Douglas just enough to get himself past the primary election finish line in an attempt to make one more of his little steals, the office of Superintendent of Public instruction.

We’re already on to you Johnny Huppenthal and the rest of Arizona’s voters are now on to you too.  Class dismissed.

About Letter to the Editor 354 Articles
Under the leadership of Editor in Chief Huey Freeman, the Editorial Board of the Arizona Daily Independent offers readers an opportunity to comment on current events and the pressing issues of the day. Occasionally, the Board weighs-in on issues of concern for the residents of Arizona and the US.