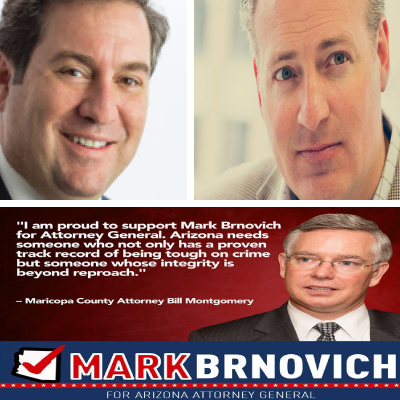 “I am proud to support Mark Brnovich for Attorney General. Arizona needs someone who not only has a proven track record of being tough on crime but someone whose integrity is beyond reproach.” — Maricopa County Attorney Bill Montgomery

One could say that those who build a house of cards have no integrity. Those that would sell them have even less.

In 2007, Arizona Attorney General candidate, Mark Brnovich’s was a lobbyist for involvement with the Corrections Corporation of America (CCA), advocating for longer prison terms, and a prosecutor for the United States Attorney’s Office. While he was working for the Attorney’s Office, he was involved with the prosecution of 10 individuals, resulting in up to $926,100 of potential revenue for the CCA.

Nine of the ten individuals Brnovich prosecuted, committed crimes against casinos operated by Indian tribes on Indian land. It would seem that he had something to gain in this, given that he was a registered lobbyist for a corporation that could benefit from the incarceration of American Indians.

In 2009, Brnovich then became the state’s director of the Department of Gaming.

Brnovich resigned that position to run for the Attorney General’s spot telling the Arizona Republic that he was running because he believed that “Arizonans deserve an attorney general with integrity, commitment and experience to do the right thing for the right reasons—not for personal or political reasons.”

He then hired Sean Noble as a campaign consultant.

Just last year, Noble admitted to money laundering, for his involvement with several dark money groups and was considered the “wizard behind the Koch Brothers donor network.” The State of California imposed a record million dollar fine.

Maricopa County Attorney jumped on the campaign bandwagon and then, in what can only be described as a campaign stunt, used his office to begin investigating Horne for using his office for his campaign.

Leaving one to wonder what the operative definition of integrity is these days. How long will it take before the house of cards Brnovich built and Noble is selling crumble under scrutiny?