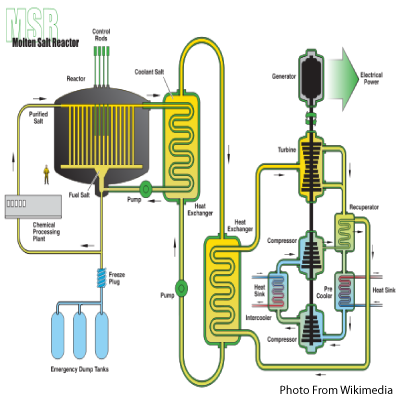 A new company, Transatomic Power, formed in 2011 by two M.I.T. PhD. graduates proposes to build a new type of molten salt nuclear reactor. Transatomic has just received a $2 million grant from Founders Fund, a private venture capital company. The money will be used to test and verify the corrosion resistance of metals that their design employs in the reactor core and piping, as well as modeling the reactor design. Molten salt reactors where experimented with by Oak Ridge National Laboratory back in the 1950s and 1960s, but they never produced a commercial application. The new design uses different “salt” and different moderators than the old Oak Ridge design.

By the way, “salt” is not table salt, it is a lithium-fluorine (LiF) mixture in which uranium or thorium is dissolved.

Molten salt reactors extract 20 times more energy from uranium than a conventional reactor, producing a far smaller and far less radioactive final waste product. And this type of reactor can use “spent” uranium from conventional reactors as fuel, thus solving a major disposal problem. Because of government ineptness and environmental activism, most spent fuel from nuclear reactors is “temporarily” stored near the reactors themselves, awaiting final burial. Conventional reactors require weapons-grade uranium (about 33% U-235) whereas the salt reactor can use lower grades (about 2% U-235). Molten salt reactors can also use thorium. This eliminates the potential for terrorists stealing weapons-grade uranium.

Salt reactors don’t require cooling water and therefore are safer than standard reactors because there is no chance of producing explosive hydrogen or steam. ” The main concern in nuclear power is to avoid a steam explosion, fire, or containment breach that could allow the release of radioactive materials outside the plant and affect public health.” If there is a breech in a salt reactor, the salt freezes solid and contains the radioactive material.

In conventional nuclear reactors, the uranium rods are surrounded by water which acts as a coolant and moderator. If the containment vessel is breeched, the heat can produce explosive hydrogen. Molten salt reactors are self-stabilizing because the uranium is dissolved in the salt. “As the core temperature increases, the salt expands. This expansion spreads the fuel volumetrically and slows the rate of fission. This stabilization occurs even without operator action.” “The main technical change we make is to change the moderator and fuel salt used in previous molten salt reactors to a zirconium hydride moderator, with a LiF-based fuel salt.”

“Transatomic Power’s design also enables extremely high burnups – up to 96% – over long time periods. The reactor can therefore run for decades and slowly consume both the actinide waste in its initial fuel load and the actinides that are continuously generated from power operation. Furthermore, our neutron spectrum remains primarily in the thermal range used by existing commercial reactors. We therefore avoid the more severe radiation damage effects faced by fast reactors, as thermal neutrons do comparatively less damage to structural materials.”

The designers say that a 520 MW reactor would cost $2 billion to construct, and, because it doesn’t need water for the reactor vessel, the plant is more versatile in siting requirements. Nuclear reactors operate all the time unlike wind and solar plants. And, of course, nuclear reactors do not emit carbon dioxide.

For full details and diagrams, read a 34-page white paper from Transatomic Power:

This seems like a viable option that would solve several problems.