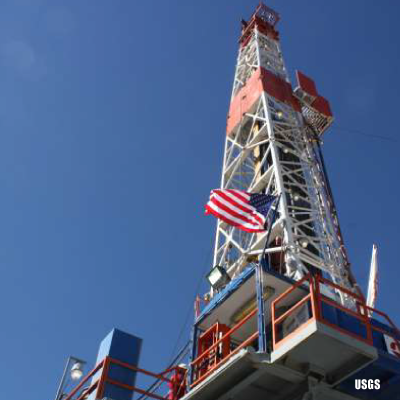 Researchers at the Colorado School of Mines (my alma mater) are developing a method of fracturing shale formations that does not use water. Instead they use liquid nitrogen or liquid carbon dioxide.

As reported by John Landman at Shaleforum.com (full story):

Liquid nitrogen at temperatures below minus 321 Fahrenheit, it is pumped underground at high pressure. Once it comes into contact with the heated, pressurized shale, a reaction occurs which caused the shale to crack open and creates fissures through which the hydrocarbons can gush out. They liken it to pouring hot water onto a frozen car windshield, with the sharp and sudden temperature change causing the glass to crack.

There are several positive results from using this technique. First, the liquid nitrogen will evaporate underground eliminating the need for costly recovery and retreatment. Further, they claim it will form bigger fissures or canals through which hydrocarbons can be extracted, boosting oil and gas production. In theory, the below-freezing liquid should actually be more rather than less effective than water based methods.

Second, it may well solve problems with water-sensitive formations or those with an unwanted amount of clay. Slickwater fracking often causes water saturation around the fracture and clay swelling, hindering the ability to transport hydrocarbons from the fracture to the well bore. Some shale absorbs water very quickly and the entire formation may swell in size and hinder transport through the fissures we have created. Even in a best case scenario, using hydraulic fracturing results in a low recovery factor, caused largely by water trapping.

This method is still in its research stage, but if it works it will dampen criticism from environmentalists and eliminate the need for large volumes of water. This would be a boon that would open up tight formations and provide even more oil and gas for America. If successful, this method could also eliminate earthquakes sometimes associated with hydraulic fracturing. The earthquakes are not due to fracturing process itself, but with the disposal of waste water.

Field tests will be performed in the Pierre Shale in southeastern Colorado next year. The intellectual property of this research will be put into the public domain so that oil companies can use it and improve it. Read more at Shale Dispatch.