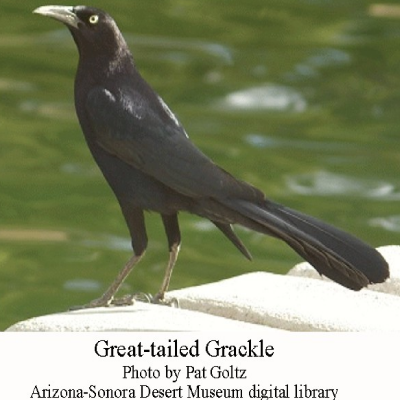 If you ever see or hear a Great-tailed Grackle (Quiscalus mexicanus), you will know why it has that name. It has a very large tail and makes a great variety of sounds. The sounds have been described as “rusty gate hinge” and “machinery badly in need of lubrication.” It also has a variety of sweet sounds. Listen to recordings from the Cornell Lab of Ornithology here.

This grackle is native to the southwestern U.S., Mexico, and Central America. These birds occur in open to semi-open habitat including farms, fields, river groves, thickets, city parks, grocery store parking lots, and my backyard.

Their diet includes plant matter (such as corn, sorghum, oats and fruit), insects, reptiles, small fish, aquatic invertebrates, and eggs and nestlings of other birds.

“The Great-tailed Grackle nests in colonies; both males and females may have more than one mate. The nest site varies but is usually in dense vegetation near water. The bulky, open, cup-shaped nest, which may be a few feet to over 20 feet above the ground, is made of twigs, weeds, grass, rushes, and other available material. Bluish eggs (three to five) with brown scrawls hatch in thirteen to fourteen days. The young, which are fed only by the female, leave the nest about three weeks after hatching.”

“In winter, enormous flocks of both male and female Great-tailed Grackles gather in roost trees. These winter roosts can contain thousands of individuals, with flocks of up to half a million occurring in sugarcane fields in Texas’s Rio Grande Valley.”

“In 1900 the northern edge of the Great-tailed Grackle’s range barely reached southern Texas. Since the 1960s they’ve followed the spread of irrigated agriculture and urban development into the Great Plains and West, and today are one of North America’s fastest-expanding species.”

In general, where people go, grackles follow. These birds are very social.