Comments made by Major General James Post, Vice Commander of Air Combat Command, that “anyone who is passing information to Congress about A-10 capabilities is committing treason” has sent shock waves through the USAF and the military ranks in general. As a result, there is a growing demand for congressional hearings on the matter.

The USAF is waging a full-on disinformation war on the A-10 and the free speech of the airmen appears to be the first casualty.

As part of the war, during a January 15 address, Air Force Secretary Deborah Lee James, said the A-10 Warthog has performed 11 percent of US Air Force sorties against the Islamic State militant group, also known as ISIS, according to Defense News.

What James left out of her message was that the A-10 did not arrive on the scene until November, James also failed to mention that the USAF sent only sent 4 percent of the fleet with only a fraction of the spare parts needed for the mission.

So not only did the USAF keep the most effective close air support platform out of the fight, they are relying on its late arrival to the fight to make it appear less effective than the boots-on-the-ground know it to be.

Post’s comments were addressed on the popular military personnel website; John Q. Public, in a piece entitled, Creeping Fascism in the (un?)American Air Force?  In the essay, the author, a retired USAF Lieutenant Colonel, pilot, Squadron Commander, Weapons Officer, veteran of OEF/OIF, and the recipient of the Distinguished Flying Cross, notes the “failed, flawed, but relentless effort by the service to retire the A-10 against the best advice of many of its own people, “and raises question: “does the Air Force see itself as an extension of a free society or an extremist and intolerant world apart?”

Now, operatives on the Hill are asking the same question, according to sources. Many others are hoping the wagging tongues will lead to a Senate hearing – especially at a time when so many in the military feel they are under attack from the Obama administration.

Yesterday, even the peanut gallery in Hollywood took their pot-shots at military snipers calling them “cowards.”

The critics of the USAF are neither critics nor traitors. They simply want the USAF to advance American interests while conforming to American traditions. As the John Q. Public essayist writes, “One such important American tradition is free expression… The Air Force is struggling to uphold this tradition. This is reason for alarm, because the cause of liberty cannot be advanced by an air force that can’t itself bear the pains of untidy freedom.”

It is not the first time the Air Force has been called out for its apparent disrespect for the law when it comes to the A-10. Almost exactly one year ago, New Hampshire Republican Sen. Kelly Ayotte warned the Air Force that any attempt to cut the A-10 in 2014 may violate the law.

At that time, Ayotte wrote a letter to James alleging that the Air Force Air Combat Command (ACC) had issued orders intended to stop Suite 8 development, which “will prevent any new subsystems from being installed and integrated into the airframe’s avionics architecture,” and prevent the upgrades of the identification friend or fire beacon to levels required by 2015.  (To read the letter click here)

“The Air Force appears to be taking steps to retire the A-10 in violation of the law before Congress has had a chance to receive and scrutinize the Department of Defense’s FY 2015 budget request as it relates to the A-10,” wrote Ayotte.

No one could question the loyalty of Senator John McCain and others who spoke out in favor of the A-10 at a press conference in November. Joining McCain that day was Master Sergeant (retired) Tim Stamey – an Air Force combat veteran, Silver Star recipient, and former JTAC.  He served in the Air Force for almost 22 years, including 14 years as a JTAC with extensive experience controlling a variety of aircraft in combat – including A-10s, F-15s, F-16s, B-1s, and B-52s. Master Sergeant (retired) Stamey was awarded the Silver Star for his actions during Operation Enduring Freedom.

According to his Silver Star citation, in late 2001 and early 2002 in Afghanistan, “Sergeant Stamey provided positive terminal attack control on over eighty sorties of fighters and bombers destroying over seventy-five tanks, mobile anti-aircraft systems, and vehicles, four ammo-dumps, numerous command and control facilities and bunkers, inflicting 2,139 enemy casualties.”  Master Sergeant Stamey believes the A-10 is the United States’ best close air support aircraft— one that he credits with saving many American lives.  He opposes the Air Force’s decision to prematurely retire the A-10 – a decision he believes will put U.S. troops at increased risk in future conflicts.

Legal experts note that the Twelfth Edition of Military Commander and the Law, is issued to all commanders as a desk reference.  On page 392 of the manual the issue is clearly addressed:

10 U.S.C. § 1034 and AFI 90-301 also states that no person may restrict a military member from communicating with a member of Congress or an IG as long as the communication is lawful

Post knew or should have known that his comments were in direct violation of the law. 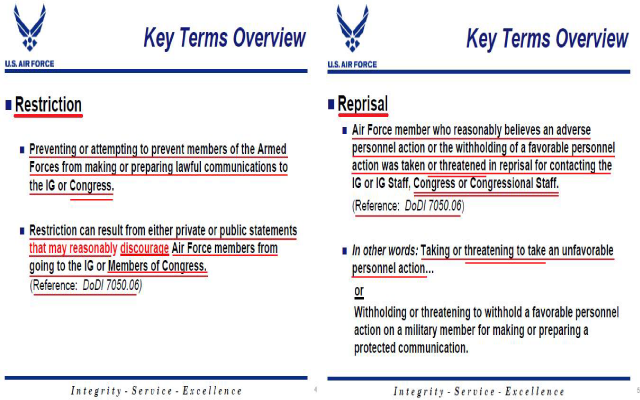 Ayotte: If the Air Force cut their acquisition failures they could save the A-10

Air Force brass taken to task for A-10 mothball plans

Flake drops A-10 bomb on constituents