This article is a book promotion for a new murder mystery by Lonni Lees, my wife. The book is titled The Corpse in the Cactus. 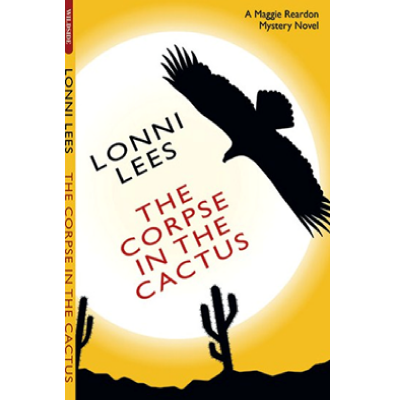 Tucson police detective Maggie Reardon is back, in the sizzling sequel to The Mosaic Murder!

The murder that Detective Maggie Reardon just solved at a local Tucson art gallery has already created repercussions, complicating her life both legally and personally. Her new lover dropped to second place when a new man entered the picture. A dead man whose body had been found at The Arizona-Sonora Desert Museum lying under a bed of cactus. What at first appeared to be a tragic accident was quickly starting to smell like murder.

Losing wasn’t her game, but she’s been dealt a nameless victim with no witnesses, no suspect, and no apparent cause of death. As the evidence unfolds, Detective Reardon battles a hostile fellow cop, determined to see her lose her badge.

The mixture adds up to a scorching southwestern recipe guaranteed to sear your taste buds — but leave you begging for more!

The Corpse in the Cactus is available from Amazon.

Besides The Mosaic Murder, linked above, Lonni’s first novel, Deranged, is about a serial killer who meets his match. This book won a first place award from PSWA a professional association of writers, forensic experts, police and firefighters. Lonni also has an anthology of her noir-style short stories in the book called Crawlspace. One of the stories in this collection, The Blue-eyed Bandit, also won an award from PSWA.

Lonni’s story “The Confessor” online at Shotgun Honey won First Place as well as Grand Prize from PSWA. Take a look at The Confessor for a short taste of noir.

If you are a fan of murder mysteries, give both The Mosaic Murder and The Corpse in the Cactus a try. If you like sheer horror and suspense, try Deranged.