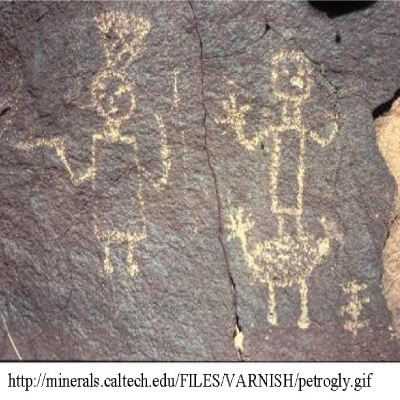 Desert varnish is the reddish-brown to black coating on pebbles, boulders, and cliff faces one sees in arid regions. Some of these surfaces have become the canvas for petroglyphs, rock drawings made by scraping off the desert varnish. Desert varnish is not just a chemical stain; it is an ecosystem teeming with life.

Desert varnish (aka rock varnish) is a patina on the rocks, usually less than one millimeter thick. It is composed of clay, iron (red) and manganese (black). Some also contains silica.

This patina is the home of bacteria, which, over thousands of years glean the clay, iron, and manganese from wind-blown dust and produce the patina to protect themselves from the sun. Bacteria survive by being good chemists.

“Several genera of bacteria are known to produce desert varnish, including Metallogenium and Pedomicrobium. They consist of minute spherical, rod-shaped or pear-shaped cells only 0.4 to 2 micrometers long, with peculiar cellular extensions. In fact, the individual cells are smaller than human red blood cells which are about 7.5 micrometers in diameter. Because of the radiating filaments from individual cells and colonies of some species, they are called appendaged bacteria.

“All living systems require the vital energy molecule ATP (adenosine triphosphate) in order to function. In our cells ATP is constantly produced within microscopic bodies called mitochondria. As electrons flow along the membranes of our mitochondria, molecules of ATP are generated. The electrons come from the breakdown (oxidation) of glucose from our diet. Although varnish bacteria do not have mitochondria, they do have a similar inner membrane structure through which electrons flow to generate ATP.

“However, in varnish bacteria the electrons come from the oxidation of manganese and iron rather than glucose. Herein lies the marvelous adaptive advantage for producing a layer of black and red varnish on desert boulders. As you gaze at the miles of varnish-coated boulders and rocky outcrops throughout arid desert lands, you can appreciate the magnitude of these microscopic cells all producing their countless trillions of ATP molecules!”

“Rock varnish forms very slowly. Surfaces of some rocks, including many coarse-grained granitic rocks, rarely sport thick coats of varnish because they weather and erode faster than varnish can form. But if rock surfaces resist weathering, varnish coatings become increasingly thick and dark with the passage of time. Rock varnish therefore provides geologists with a valuable tool for determining relative ages of different alluvial fan deposits. Stone surfaces in older deposits are generally covered by thicker, darker coats of varnish. In some cases, the thickest, darkest coatings of varnish found on older deposits may have been accumulating for many tens of thousands to over 100,000 years.”

Encyclopaedia Britannica opines: “The rate of varnish formation varies: it generally is thought to take about 2,000 years for it to form in arid areas, because it coats artifacts and natural objects known to be of such antiquity; but it has formed in less than 50 years in the Mojave Desert. Both high evaporation rates and sufficient precipitation are necessary for desert varnish formation.”

Cal-Tech warns: “Things which look like varnish but which are not. Counterfeit manganese deposits can take various forms. This is an algal stream deposit from Rock Creek, California. It looks like a coating of manganese oxide, but contains no manganese at all. This is a fungal dendritic growth from sandstone from Meteor Crater, Arizona which also looks like a manganese deposit to the casual observer.”

Now you know that those reddish to black patinas on rocks are not just stains, but actually micro-ecosystems teeming with life.