PHOENIX – In late January, Krysten Muir found herself alone in a hospital room, unable to even move.

And Muir had been on the move most of her life.

In 2015, Muir made Arizona history by becoming the first female athlete to score in an AIA state championship football game when she booted a pair of extra points for Tempe’s Marcos de Niza against Saguaro High in the 2015 4A championship game.

Before she began kicking in high school, Muir played soccer and volleyball. She also rode horses competitively and as a kid often would hang out at football practices at Marcos de Niza, where her father Jeremy was an assistant coach.

Her kicking journey began mostly out of curiosity and boredom.

“I just started setting up the tee and ball to see if I could even do it,” she said.

When she knocked her first few attempts through the uprights, she continued to move further and further back. A coach noticed and mentioned that she could compete for a kicking spot. She eventually beat out two other kickers to earn her spot at Marcos.

After graduating from Marcos de Niza in 2017, she played soccer and took classes at Gateway Community College with plans to become a personal trainer. She was working and saving money. She was on the move.

Then her life was literally flipped upside down.

In late January, Muir was a passenger in a car traveling south from Payson in weather that she describes as “pretty gloomy.” The driver lost control and the car rolled over.

Muir suffered a spinal injury and lower body paralysis in the crash.

Witnesses helped cut her seatbelt and get her out of the car, and paramedics took her to Banner Payson Medical Center.

While in Payson, she underwent tests to determine an exact diagnosis. Her L1 vertebrae had burst, and her L2 vertebrae was fractured. She was paralyzed from the waist down.

Chad Dunn, Muir’s physical therapist and founder of Move Human Performance Center in Chandler, said patients describe the sensation of such an injury as “somebody pulling the electrical cord out.”

After the diagnosis, she was transferred to Banner Desert Medical Center in Mesa. She had to be driven to Mesa in an ambulance because the gloomy weather had turned worse, preventing a helicopter airlift for her.

“Nobody wants to hear those words that your child was never going to walk again,” Kathy Muir said.

Once the agonizing wait was over and Krysten arrived in Mesa, Kathy and Jeremy could only see their daughter for a short time before she was quickly rushed into surgery.

And because of COVID-19 protocols, her family was unable to visit her in the hospital.

After surgery, Muir said doctors placed her odds of walking again at 50/50.

While Muir was in the hospital, Dunn reached out to her to help with her mental state. According to Dunn, the mental side of the recovery process is just as important as the physical, as reflected in his motto: “Mind Over Virtually Everything.”

Dunn had Muir paint her toenails different colors based on what she was feeling. If her toes were cold, she painted them blue. If they were hot, she painted them red. The ones that she could wiggle she painted yellow, because that is the color she associates with happiness.

Once out of the hospital, the recovery process continued. Krysten had to relearn how to do everything from the waist down, including how to walk and how to dress herself.

“At first it really was mind blowing because I was like, ‘Wow, I’m literally telling my leg to move forward and it is not moving forward,’” she said.

Dunn and Muir continued to work together to rebuild her strength and help her relearn muscle movements. Kathy Muir refers to them as “The Dream Team.”

“He’s believed in her since day one,” Kathy Muir said. “And he continues to believe in her. They have a really good relationship, and I think he will be in her life forever.”

Dunn’s focus on both physical and mental strength resonated with Muir, and her mental toughness continues to impress Dunn.

“She’s such a competitor,” he said. “She’s such a tough girl that she’ll come back to the best of this injury.”

Muir continued to move, pushing forward with support from Dunn and others from all over the community, including from her former high school, Marcos de Niza.

“The community support has been amazing, there’s not a better word for it,” Jeremy Muir said. “We wouldn’t be able to do the thing that we’re doing if we didn’t have that support and we’re all incredibly grateful for it.”

The tenacity she developed as an athlete has helped. But progress did not come easily.

Muir was used to doing squats and leg presses, stacking multiple plates on the bar. Now, she had to relearn the motions with little to no extra weight on the bar.

After about three months, she was able to walk again with assistance. She was determined to beat those 50/50 odds, and while her parents were afraid to “bank on it” happening, there never was a doubt in her mind.

“I already knew I was going to walk,” Muir said. “It was like, ‘Okay, thank you for that suggestion, but I am going to. I just have a lot of work to do.’” 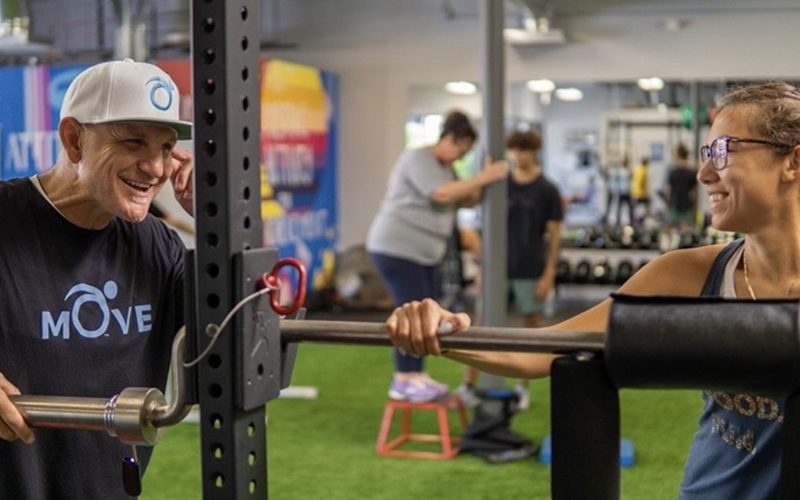 With the help of Chad Dunn (left) of Move Human Performance Center, former kicker Krysten Muir (right) is inspiring other athletes with her comeback from a severe back injury. (Photo by Dylan Wilhelm/ Dylan Wilhelm/Cronkite News)

While they initially tried not to get their hopes too high, her parents quickly began to believe she could overcome the injuries, too.

“(Once) they started getting a little bit more sensation on the one side, then I started to build more hope,” Jeremy Muir said.

And she hasn’t stopped moving since.

In September, the Arizona Cardinals partnered with the Desert Financial Foundation to create the Arizona Breaking Barriers Student Athlete Scholarship in her honor to recognize “determined, resilient and impactful student athletes.” Muir will select one of the 10 recipients, who will be honored at a Cardinals home game later this season.

“I think that’s a fantastic legacy,” her father said of the scholarship. “And if that is how her name goes down and how she’s remembered at the end of the day … then that’s all you can hope for as a father.”

Now the kicking coach at Marcos de Niza, Muir is part of the same Padres coaching staff that her father has been a part of for years. For her, it is a way to continue sharing her passion for kicking.

“I can help with my knowledge to the next (kicker) and just motivate them and push them as far as they can,” she said.

Not only do her players feed off of her energy, but they also feed off of what she has been through and how she continues to overcome obstacles.

“Seeing her Instagram, where if you go and follow it you can see her pushing herself . . . makes you want to push yourself, and I feel like all the guys are benefitting from that,” said Tristan Bryant, who is Marcos de Niza’s kicker this season.

And Muir just keeps on moving – ahead.

Her future plans include writing a book and working as a motivational speaker. She is close to earning her personal-training certification.

“I feel like I have a good amount of options for me,” she said. “They’re kind of just like all up in the air, but I definitely want to give them all a try.”