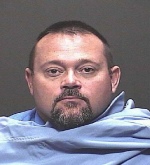 Ricardo Lee Moreno, also known as Richard Lee Harris, has been arrested for messages he allegedly sent to a 15 year old student. Deputies from the Pima County Sheriff’s Office responded to the Altar Valley Middle School, on February 2, in reference to the inappropriate text messages from the assistant wrestling coach.

The victim reported the inappropriate texts to the wrestling coach who reported the incident to the principal and the school district. Crimes Against Children Unit detectives continued to investigate the case.

On February 8, a search warrant was obtained for Moreno’s home in the 8400 block of South Warden Road.

Based upon the totality of the investigation and evidence collected at Moreno’s home, an arrest was made. Moreno was booked into the Pima County Adult Detention Center on charges of Luring a Minor for Sexual Exploitation, a class three felony.