The Heritage Foundation has a detailed report on this issue (see report here).

Heritage contends that this emissions limit and other EPA regulations will substantially reduce coal production and consumption in the U.S. Currently, 21 states get the majority of their electricity supply from coal-fired plants as shown on the map below. 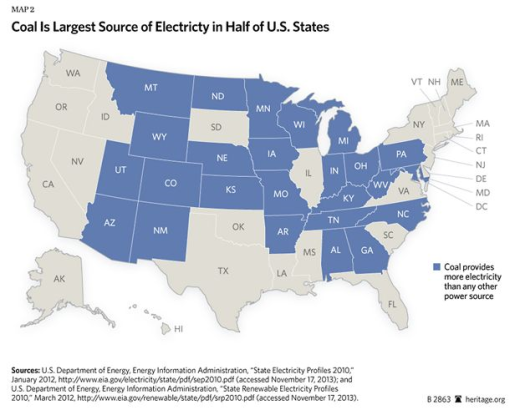 Heritage provides another map and chart showing the percentage of electricity produced from coal in each state (Arizona produces 39% of its electricity from coal). Heritage also provides a table showing how the regulations would affect employment by 2023. In Arizona, Heritage projects a loss of more than 12,000 jobs.

Nationally, the Heritage Foundation analysis projects that the restrictions on coal will have the following effect for the period 2014 to 2038:

Aggregate gross domestic product (GDP) decreases by $2.23 trillion over the entire period of the analysis.

They also project that natural gas prices will rise by 28 percent. Heritage says “The most effective approach to halt such harmful, bureaucratic regulatory undertakings would be to permanently prohibit any federal regulators from using GHG emissions as a reason to regulate economic activity.” “Congress should remove the EPA’s and any other agency’s authority to regulate carbon dioxide and other greenhouse gas emissions.” “President Obama’s climate plan would have a chilling effect on the economy, not the climate.”