Alternative energy has some unintended consequences. Wind farms are known to chop up birds and bats, but solar energy was seen as benign – until now.

A report from the National Fish and Wildlife Forensic Laboratory examines bird mortality from three solar facilities in California. What is particularly interesting is that these facilities each represent three different methods of producing solar energy. The objective of this report was not to count the number of avian deaths, but to study the manner of death they did 233 bird remains collected at the sites over a few days.

The Ivanpah generating station, in the Mohave Desert southwest of Las Vegas, uses 173,500 heliostats each with two mirrors to focus sunlight on a tower where water is converted to steam to generate electricity. This method is called “solar-flux” and it generates very high temperatures. Birds experience traumatic impact with the mirrors, but the larger danger is getting singed by the heat flux which is up to 800 degrees F.

The Forensics Laboratory calls this facility a “mega-trap” because it attracts hordes of insects which, in turn, attract insect-eating birds that get singed by the heat. Disabled birds and bird carcases attract predators. The Forensic Laboratory says that this facility creates “an entire food chain vulnerable to injury and death.” The graphic below shows what happened to a Peregrine Falcon: 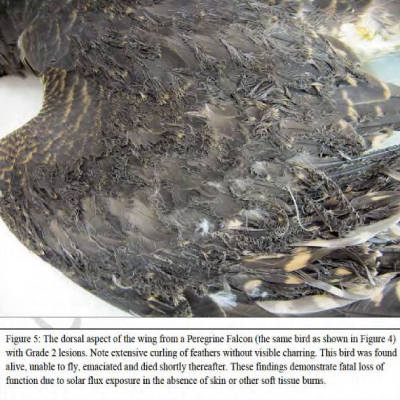 See more images of the Ivanpah facility here. Bird deaths are not the only problem experienced at Ivanpah: “Pilots flying over the Ivanpah solar energy plant in northeast San Bernardino County have complained of ‘nearly blinding’ glare from the sun’s reflection off fields of mirrors, federal documents show.” – Source

The Desert Sunlight Solar Farm (aka First Solar) in Riverside County, CA, uses standard photovoltaic collectors to product electricity. This facility was involved in a controversy about desert tortoises which had to be relocated. Photovoltaics are the type of solar installations around Tucson.

The principal threat is that birds mistake the reflective panels for water and crash into them and become injured and subject to predation or starvation.

The Genesis facility, also in Riverside County, CA, uses curved mirrors to focus light on a tube near the mirrors to heat water to generate the electricity. One of the solar plants in Gila Bend, AZ, is of this type. The threat to birds is impact trauma and predation.

The study found 71 bird species killed or injured at the solar facilities and these ranged from hummingbirds to pelicans. In summary, avian deaths occur by impact trauma and predation at all three types of solar farms and by heat flux singeing at the Ivanpah plant. The report notes that insects and bats are subject to the same dangers. Read the entire report at:

See also from my Wryheat blog:

Every year, millions of birds and bats are killed by wind turbines.

Tucson solar project not a good deal for taxpayers

The City of Tucson constructed PV solar arrays on City buildings which they claim will save on electricity costs and generate revenue. Savings and revenue are estimated to total $10.1 million over the life of the project. Trouble is, principal and interest on the bonds used to finance the project will cost taxpayers $16,710,000. Why does Tucson have a deficit?