While most Americans see the tidal wave of illegal immigrant children being herded from Central America across our borders as a man-caused humanitarian crisis, Adelita Grijalva, her father Rep. Raul Grijalva, and Tucson Unified School District Superintendent (TUSD) H.T. Sanchez see it as a financial windfall.

According to Rep. Raul Grijalva (D,AZ), he visited the Nogales illegal immigrant children’s processing center recently because, “We need to know the extent to which officials are properly using the resources available within the community.”

You see TUSD knows all too well about a rush of kids to the border.  Parents and students have been rushing out of the TUSD district borders for years escaping failed academic mandates, headed by Adelita Grijalva, interested more in developing angry social justice activists than developing academically well-rounded children headed for college.

Many school districts that border TUSD serve as “sanctuary schools” for all those kids escaping the tyranny of TUSD and seeking a safe place to learn and be kids again.

Adelita Grijalva then “shared” her very new never-before-discussed-in-advance idea with her father Rep. Raul Grijalva who plans to pass his idea onto the Office of Refugee Resettlement. Sounds like the Grijalvas have been having quite the brainstorming sessions at Sunday dinners, eh?

Might there be a non-profit created, possibly named “Grijalva’s Save the Children Fund”, to handle all that potential federal money being channeled towards creating a chain of Grijalva foster centers?

Then of course the kids will have to be educated. Since Arizona residency guidelines forbid funding to schools for kids who are not legal residents, the federal government may be asked to pony up taxpayer dollars for educating the illegal immigrant kids as well.  Might there be a Grijalva or too involved in this business venture as well?

TUSD Superintendent H.T. Sanchez seems to also be joining the chorus when he says, “We’re always open to helping in any way we can. We would be very agreeable to educating the students and using a facility to house those who have been processed and allowed to stay in the U.S.”

Notice that Superintendent Sanchez says that TUSD would be “agreeable to educating the students”? Is he forecasting their plan to dump these illegal immigrant kids into our school systems creating yet another domino effect of social and educational crises that I alluded to in a previous article ?

The Arizona Daily Independent recently  reported that some 140 to 200 illegal aliens are arriving daily at the Nogales Border Patrol Station, according to Nogales Mayor Arturo Garino, who says that the children are then cleaned up, give new clean clothes, processed by agents, and allowed to contact the embassies of their country of origin. 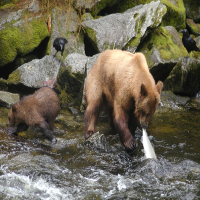 After approximately 3 to 4 days they are sent off to military bases in California and Texas.  Garino says he was informed by DHS that the process will continue all summer. It sounds like the Border Patrol is doing a stellar job under less than ideal circumstances processing the tidal wave of illegal immigrant kids and moving them safely along the system.

Like Alaskan Grizzly bears waiting in the shallows impaling salmon trying to leap upstream to freedom, the Grijalvas and others might have other plans for these dollar signs, err….children.