An earthquake measuring 5.2 occurred 09:59:33 p.m. The epicenter was located near Duncan, Arizona approximately at 50km northwest of Lordsburg, New Mexico.

The quake was felt from Show Low to Sahuarita, Arizona.

According to the Cochise County Sheriff’s Office, “There were no reports of damage in Cochise County as a result of this incident with the exception of a resident in Richland reporting two beams were cracked inside of his residence. The epicenter in Duncan reportedly has residents advising of items falling off of walls, but no injuries reported,” as of Sunday morning.

The largest earthquake occurred July 21, 1959. Minor damage to chimneys and walls was reported at Fredonia, Arizona, and Kanab, Utah, about 15 kilometers north of Fredonia. In addition, windows broke in houses and stores and dishes fell from shelves at Fredonia. Almost all merchandise was shaken from shelves in stores. A rockslide at Mather Point in the Grand Canyon was attributed to the shock.

On January 16, 1950, a strong earthquake in Apache County left several cracks in the ground as it rumbled through the small town of Ganado. The cracks, one-half inch wide and up to 12 feet long, extended in a north-south direction near the Ganado trading post.

The earliest documents which describe Arizona earthquakes were those recorded at Fort Yuma, located in the 1800’s on the California side of the Colorado River. Shocks which probably centered in the Imperial Valley of California, or in Mexico, have been noted there since late 1852.

No earthquake in recorded history has caused deaths or injuries in Arizona. In the past century or more, 14 tremors of intensity V to VII have centered within its borders, of which 12 were reported after Arizona entered the Union in February 1912. All of these shocks, however, were moderate in intensity, with one intensity VII, one VI-VII, four VI, and eight V.

Probably the most famous earthquake in this region occurred in 1887 near Bavispe, Mexico, about 190 miles southeast of Tucson. The temblor caused great destruction near its epicenter. From Guaymas to Nogales, Mexico, Benson and Tucson, Arizona, and at towns as far distant as Albuquerque, New Mexico, water in tanks spilled over, buildings cracked, chimneys were toppled, and railroad cars were set in motion. An observer at Tombstone, near the Mexican border, reported sounds “like prolonged artillery fire.” 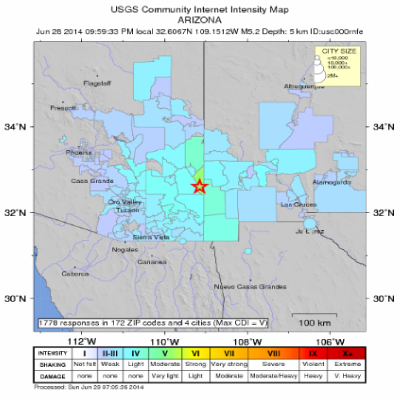