This Is Not America: Resistance, Protest and Poetics, is the third and final exhibition in the This is Not America series is co-curated by ASU Art Museum curator Julio César Morales with master’s candidates from the ASU School of Art.

Gallery Conversations: This is Not America, Part III, which will “explore this remarkable exhibition with the ASU Master of Fine Arts students who co-curated it alongside Julio Cesar Morales,” will be held on Saturday, June 21, 2014 at 3 p.m.

The series, according to event announcement “looks at the intersection of art and social change through the lens of ASU Art Museum’s collection in conversation with emerging and established artists. Works are paired as a form of call and response in order to create a dialogue around current issues related to protest and poetic gestures within the aesthetics of resistance. The series of exhibitions takes its title from Alfredo Jaar’s seminal 1987 public art video intervention at Times Square in New York City, A Logo for America, a three-part video animation that plays off the notions of “America” and its relationship to citizenship, homeland and borders.”

“The works in the exhibition explore the connection between perception and representation by drawing on key concepts such as dominance, illusion and the body as a site of action or violence,” reads the announcement. “The exhibition also poses the question “Can we be dominated because we believe in the illusion of America?”

In a piece penned this month, “How do we fight back? Turning the other cheek  Take a Toke, author of Occupied America; Rodolfo Acuña, complains that people are not fighting hard enough.

“We must recognize that government is not the problem — we are. Government only works when people are involved and frankly we are not. We believe what the media tells us, ignoring that it is controlled by the one percent. Through the media and the outright bribes, the Kochs and their tribe control a majority of our elected officials — from local elected public officials to the Supreme Court, to the president.,” writes Acuna. 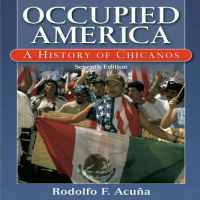 Acuna is angry that Chicanos are stumbling “ through life with the more ambitious among them dreaming of becoming part of the system seeking to become “part of the solution rather than the problem.” This scenario is played out on Facebook with Chicanas/os posing with politicos smugly believing that they are doing their best for their people.

“Tragically the will to fight back has been taken out of them. They have been domesticated by the old biblical sayings such as turn the other cheek – and sayings that have never been followed such as “the meek shall inherit the earth” — rules written by the one percent to appeal to pendejos during the early stages of Christianity,” writes Acuna.

Even activists are conditioned to believe that it is futile to fight back – join the system instead of resisting it. They are reduced to just wanting to take their toke or take a vacation so they can escape reality.

Acuna says it is getting tough to fight back when you have to “constantly fight with vendors and government brokers over trivial problems. My family just spent over a year fighting Kaiser Permanente over a claim that should have taken five minutes to resolve. The same is true of the Bank of America and the government bureaucracy that rely on frustrating you, knowing that very few people will fight back!”

A factor in the success of CSUN’s Chicana/o Studies Department has been its refusal to turn the other cheek. It took criticizing Chicanas/os and Latinos who betrayed the interests of the student community. Although distasteful, Chicana/o Studies is currently criticizing the administration for disrespecting us and distorting the truth. The current controversy may take us over the cliff; however, the alternatives are to turn the other cheek or take a deep puff on a joint.

Take another puff and go for a walk with us

The Decolonize Now! Rally last year, organized by Tonatierra drew a crowd of little over 100 in Phoenix, Arizona. The march, according to some participants, was a part of a effort to change immigration law and support open borders. The group was guided by personnel of the Comités de Defensa del Barrio and Tonatierra. One man, who was more than willing to explain his understanding of the term “decolonize,” identified himself as a doctor who recently moved to Arizona. The doctor, accompanied by his a wife, a nurse, said that decolonization “means to get rid of the 520 year old rule that the pope decided in Europe that you could take over countries and turn them into your own land and that rule wasn’t in affect before that.”

The doctor said that the solution would be “comprehensive immigration reform, which means a pathway to citizenship for people who have been here for awhile, a year or two or have family here and not have discrimination against brown skinned people because they are the ones who are related to the Native Americans. This land belonged to some of their families hundreds of years ago.”

Mild-mannered idealistic professionals, like the doctor previously referred to, were joined by hard-core MEChA members and Brown Berets. Various definitions of decolonization were offered by participants.

In his meandering missive, Acuna retells a story of a student who he claimed once told him that she admired him “because it seemed as if I was always getting arrested for a cause and that her father seemed mute. I pointed out to her that if her father missed a day of work, her family missed a meal whereas I could list the arrest on my resume as “community service,” he wrote.

“The problem was not her father, but the Latino leaders posing for photos – like my father used to say smiling, “como changos comiendo caca,” concluded Acuna.

MEChA, the movimiento and anti-Semitism: Fact from fiction