When you ask Tucsonan Gebben Miles what his greatest achievement has been, he will answer: “Learning of God’s Love for Man”

When I think of Gebben, there are several thoughts that come to mind. First: he is a heck of a good shooter, but he is also one of the most humble World Champions you will ever want to meet.

Gebben has always reminded me of the parable of the talents in Matthew 25: 14. He has invested in the talents that God blessed him with and he has increased them to a degree that most of us can only wish for.  But not only has he increased his God given talents.  He uses his abilities as a shooter and speaker to affirm to the world that without the love for Christ in his life, He would not be where he is today.

Gebben has taken Matthew 5: 14 to a new level  (“You are the light of the world. A city set on a hill cannot be hidden. 15 Nor do people light a lamp and put it under a basket, but on a stand, and it gives light to all in the house. 16 In the same way, let your light shine before others, so that[a] they may see your good works and give glory to your Father who is in heaven) .

Gebben holds Bible studies and Fellowship meetings at almost every event he competes in. At first there were only a few people attending, but that didn’t stop him. I went to one at the Tucson Trap and Skeet Club recently and it was standing room only.

Gebben Miles is the current Champ of Champions in the Sporting Clays world; He has won or placed in every major event in the world.  He is the current Champion in the new Professional Sporting Clays Association Tour, which is a lot like the PGA but with shotguns and clay targets. In early 2014, over  550 of the world’s best clay target shooters assembled in Dubai for a week long competition (The Nad Al Sheba). Almost one million dollars in prize money was on line for these competitors.  The targets were some of the most extreme targets you could imagine in one of the most spectacular shooting events ever held.

Gebben started winning national competitions in 2004, but it was a rocky road. In the competitions where he shot well, he was prideful, when he didn’t shoot well, he looked for other worldly pleasures to fill the void that losing left in him. Then in 2008 he attended the Athletes in Action Ultimate Training Camp, what he experienced there changed his life.  It was there that he learned he had to give his entire life to Christ, if he wanted to find true happiness.

2010 -National All Around Runner Up

2011 – National All Around Champion

If you want to watch Gebben in action, NBCS is now televising the PSCA events

Gebben has a instructional video . It is called Quiet Dust Shooting and can be ordered from his website at gebbenmiles.com

Gebben is a great coach and when he is not competing, he is available for private and group lessons. 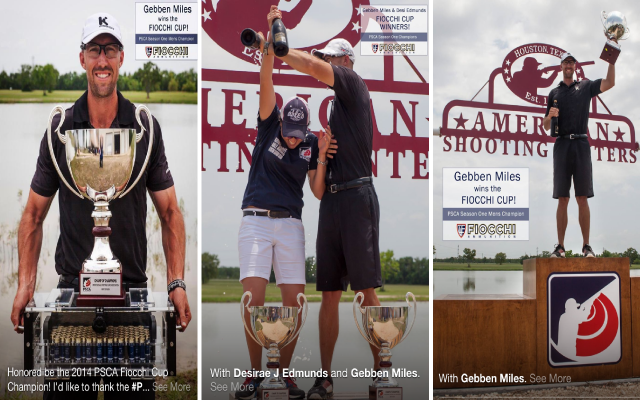