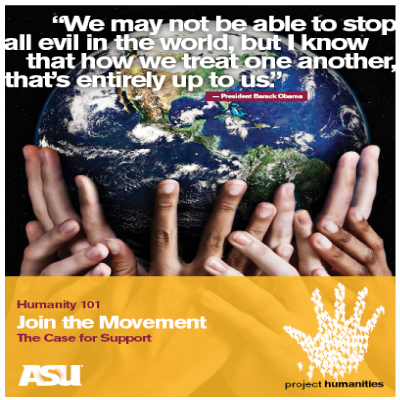 Last month, Arizona Congressman Matt Salmon introduced a bill as part of his Shrinking Our Spending Initiative, or SOS Initiative, which aims to eliminate funding for the National Endowment for the Humanities (NEH). This month, ASU has announced that their “award-winning Project Humanities has partnered with EqualityTV to create and host Hacks 4 Humanity.

According to the University, “The event is a part of the fall kickoff for Humanity 101, Project Humanities’ 2014 initiative based on the seven basic principles of humanities: forgiveness, kindness, integrity, self-reflection, compassion, respect and empathy. As such, participants of Hacks 4 Humanity will cluster to create their own apps or other technologies that support the social good. Each app will in some way reflect one or more of the seven principles.”

Community members, both with or without development experience, are invited to attend according to the University’s press release.

Participants will form teams that include developers, designers and “visionaries,” who at the end of the two days, will present their newly-created mobile app.

In a statement released announcing his legislation, Salmon was particularly critical of “the enormous waste this unaccountable non-profit facilitates with our tax dollars.”

Salmon was especially critical of the money spent on an frivolous undergraduate programs. Salmon cited a grant of $24,562 for the development of a lower-division undergraduate course to investigate multiple perspectives on the question, “What is belief?”

He said, “To waste taxpayer funds creating undergraduate courses to distract from the actual accumulation of knowledge by analyzing ‘the good life’ seems to run contrary to the NEH’s mission and demonstrates exactly why such excesses should be eliminated. The NEH is free to pursue private funding for any programs it wishes. In light of our astronomical debt, burdening the U.S. with these thoughtless projects is insulting.”

ASU’s Project Humanities depends on private money and the “support and investment of others equally committed to Humanity 101. According to its brochure, they “seek investments of any amount which will go exclusively toward establishing this movement.”

According to the brochure, a “charitable contribution to the Arizona State University Foundation (a 501(c)(3) organization) designated for Project Humanities/Humanity 101 provides a permanent seat on the Humanity 101 Board of Advisers and an opportunity to be one of the founders of this initiative.”