On March 27 at about 5:30 p.m., a 33-year-old Tucson man, Anthony Sanchez was chased by a Pinal County deputy for speeding on Redington Road near San Manuel. During the vehicle pursuit, the man crashed his 2008 Buick sedan into a Rural-Metro ambulance and fled the scene of the collision. The vehicle pursuit continued through the town of 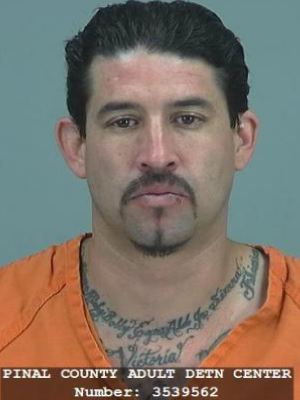 San Manuel until the driver and passenger abandoned the vehicle on E. Webb Drive near Main Street. After a short foot pursuit, the driver was taken into custody. The passenger was not immediately located after fleeing the vehicle.

Sanchez is being held in custody at the Pinal County Jail for Unlawful Flight, DUI, Extreme DUI, Driving on a Revoked License, Hit and Run and Criminal Speeding.

Sheriff Paul Babeu said, “The driver initially stopped after the deputy pulled him over for travelling 25 miles-per-hour above the posted speed limit on Redington Road. When the deputy got out of his patrol car, the man drove away at a high rate of speed. After reaching speeds up to 100 mph heading toward San Manuel, the man attempted to pass a Rural-Metro ambulance on the right side. That’s when he sideswiped the ambulance and kept on driving. Fortunately, nobody was hurt on the ambulance. After trying to evade the deputy on the streets of San Manuel, the suspect stopped his car and fled on foot. The deputy chased the man down and captured without injury to any innocent bystander, the deputy or the suspect.”

After arresting the suspect, the deputy found alcohol in the car. Sanchez admitted to drinking and driving and told the deputy that he had just gotten out of jail for a previous DUI offense.