While the residents of the eighth poorest metropolitan area make tough choices between buying fuel for their vehicle or feeding their kids, their elected representatives on the Pima County Board of Supervisors make lunch plans. A quick review of emails and calendars requested by the ADI shows pampered supervisors who talk of equity but enjoy the benefits of wealth and power.

From having talking points prepared by staff, to having vehicles washed and fueled, with time to spare for the gym, some members of the Board are catered to in a style rarely even afforded executives in the community’s larger corporations. At the same time, County supervisors are trying to sell regressive sales and fuels taxes that will impact the poorest residents the most.

Whether it is hobnobbing with Jim Click, or having the Communications Director Mark Evans arrange for media events to highlight the little that they do, the supervisors use their power to maintain it.

As an example, Supervisor Ray Carroll is set to retire. The short-timer’s attitude is reflected in his calendar which any one percenter would envy. Other than 2 hours a week set aside for staff meetings and occasional Board meetings, considerable time set aside for the gym in the otherwise mostly ceremonial schedule.

Arizona statute provides, for supervisors in counties with over 500,000 residents, a salary of over $76,000. That is chump change compared to Huckelberry’s swollen $320,000 a year salary, but considering the fact that he actually works at shuffling the deck chairs on the Titanic, and the supervisors merely runaround telling everyone that the ship only hit the tip and everything will be just swell, the arrangement seems fair.

In fairness, some of the supervisors run around and others like Supervisor Ramon Valadez can’t be bothered because he is too busy playing video games.

We know these things because, contrary to Carroll’s claims that data was scrubbed in the case of Supervisor Ally Miller’s young staffer, Tim DesJarlais, the County IT Department appears to keep meticulous records of internet activity.

Taxpayers would expect more, if they had any idea just how little work they actually get for their money. Although there appears to be true professionals working in the County’s ranks, few of those who can pull rank deserve it. 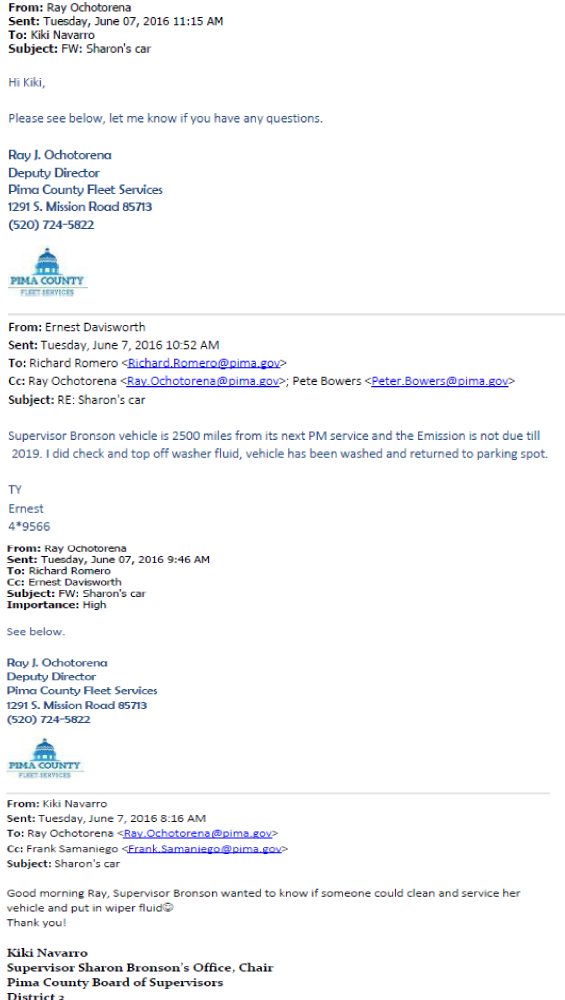