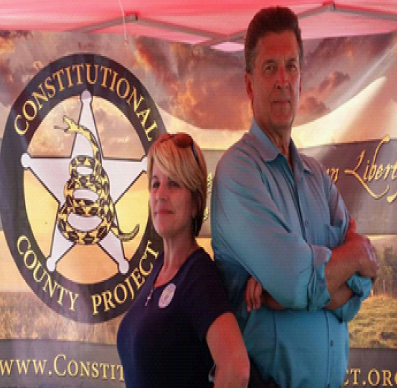 Navajo County Sheriff candidate Dawn Wilson will have former Graham County Sheriff, Richard Mack, as her ‘Under Sheriff’ if elected. Mack is the only sheriff in American history to sue the federal government and ultimately win a landmark case at the United States Supreme Court.

Founder of Constitutional Sheriff’s and Peace Officers Association, CSPOA, author/speaker and former sheriff, Mack has served in a wide variety of roles over the course of his twenty year career in law enforcement, which began in Provo, Utah.

Mack began his career as a parking enforcement cadet while attending BYU. A couple of years later he became a full-time officer and was soon promoted to Corporal, Sergeant, and Detective. His most traumatic experience there was a one-year assignment as an undercover narcotics agent. After 11 years with Provo PD, Mack decided to return to his hometown in Arizona and run for Graham County Sheriff. He was sheriff for two terms until 1997. He was named Elected Official of the Year by the Arizona-New Mexico Coalition of Counties, received the NRA Law Officer of the Year, inducted into the NRA Hall of Fame, 1995 Cicero Award, Samuel Adams Leadership Award, and Gun Owners of America Defender of the Second Amendment Award.

Mack has been a consultant on numerous cases regarding police abuse, excessive force, and public corruption. He now resides with his wife of 41 years in Gilbert, Arizona.

Navajo County Sheriff candidate Dawn Wilson began her career as a Communications Officer with the City of Overland Park, Kansas Police Department in 1989. Wilson hired on with a premier law enforcement agency, the Johnson County Sheriff’s Office in 1992, and attended KLETC (Kansas Law Enforcement Training Center) becoming a certified Law Enforcement Officer. Over the next 7 ½ years, Wilson worked a variety of areas, starting in detention then, after one year of service became a training officer. She worked closely with Personnel and Training, instructing classes such as CPR, Cultural Diversity, and Suicide Prevention. Although not officially transferred on paper, Wilson also worked with court security, community policing, transportation (conducted out-of-state extraditions), assisted patrol on special assignments, assisted city agencies with parades, and worked county fairs promoting the department and recruiting. She conducted detention investigations, and sat on officer review boards. Wilson was a member of the Rape Crisis Evidence Collection Team.

Wilson has served on the Sheriff’s Transition Team working with construction workers, architects, and interior designers to build a state-of-the art detention center and sheriff’s building. The team developed and wrote standard policy and procedures for all law enforcement staff pertaining to Detention.

Dawn Wilson has been endorsed by Mack and Joel Alcott of the Tenth Amendment Center.