For Republicans like Sergio Arellano, excitement has been growing daily as they await their invitations to the historic inaugural events for President-elect Donald Trump. Excitement turned to disappointment this week when Arellano received his invitation only to find that it had been destroyed in the mail.

The badly machine-mangled mail was encased in an envelope with a note to “Dear Valued Customer” from the Post Master apologizing for the destruction. The apology offered little consolation to Arellano, who had hoped to frame the invitation, for his young sons.

In fact, when he posted a picture of the invitation on his Facebook page, he was immediately contacted by a fellow Republican who shared her recently delivered machine-mangled mail. 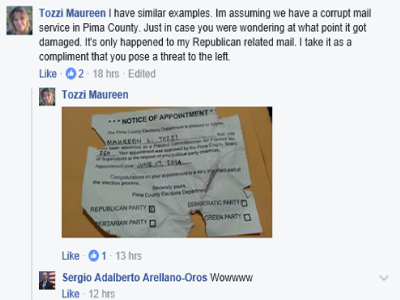 Along with the picture, the Facebook friend wrote: “I have similar examples. I’m assuming we have a corrupt mail service in Pima County. Just in case you were wondering at what point it got damaged. It’s only happened to my Republican related mail. I take it as a compliment that you pose a threat to the left.”

In a video Arellano had posted to Periscope shortly after receiving the package and moments before being sworn in as a Continental School District governing board member, he showed the badly mangled invitation and expressed his disappointment that supporters of President-elect Trump like him have endured harassment, abuse, and carelessness by political opponents.

In the video Arellano discusses how he and a group of young millennial Mexican Americans were subject to thrown rocks and hurled epithets as they walked through the border town of Nogales, Arizona in a sign of support for Trump just prior to Election Day.

The son of immigrants, a Wounded Warrior who served his country in Iraq and returned stateside after serving honorably, Arellano is not exactly the sensitive type. He is the type to expect excellence. While in uniform, he performed his duty to this country to the best of his ability. Now in a business suit and tie, he continues to serve his community to the best of his ability. The fact that postal workers would either carelessly or deliberately feed the invitation through the machines in such a way as to destroy it is simply something he can’t fathom.

“We endured rock throwing. We endured name calling, and to think that those we trust with our treasured possessions would be so careless is really unfortunate. It may be exactly why Donald Trump got elected. People are tired of petty politics. They’re tired of the games, and the names and they’re looking for more. Something as simple as treating people’s possessions with basic care should not be too much to ask for,” said Arellano.