On December 20, 2016, the Tucson Police Department responded to a report of animal abuse in the 2500 block of East Cameron Vista. The caller told police they had witnessed a male subject in the neighborhood hitting his dogs multiple times with a shovel. The witness stated that the dogs were yelping and that one of the dogs appeared to be limping.

When officers responded to the residence, they located an adult male standing in the yard with a shovel in his hand. He was identified as 28-year-old Noe Morales. He told officers he was filling holes with the shovel, but denied hitting his dogs. Officers asked to see the dogs and noticed one of them had a severe limp. 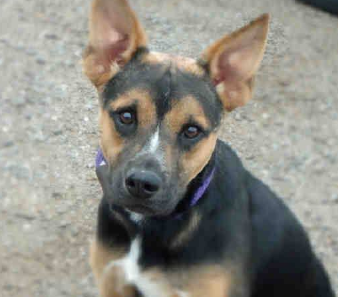 Detectives with the Tucson Police Department and an investigator with Pima Animal Care Center – Pacc responded to the residence to continue the investigation. After examining Morales’ three dogs, PACC took control of the animals and cited Morales for multiple violations (Neglect-no shelter, Neglect-no water, No License and No Rabies Vaccination).

“Tyler”, the dog with the limp (pictured), was immediately taken for further medical evaluation. It was determined that Tyler had a chronic fracture to one of his hind legs. Although he received medical treatment, doctors eventually had to amputate the leg due to the severity of the injury.

On February 24, 2017, Tucson Police Officers located Noe Morales at a residence in the 4500 block of S. Mission. Morales was taken into custody and booked into the Pima County Jail on a felony charge of Animal Abuse.