The booth at the April 6-9 event is part of a sponsorship package purchased by the agency for $15,000. It includes a recruitment booth and advertising at both U.S. Country Thunder festivals in Arizona and Wisconsin, according to Shirley Chen Barry, CBP’s director of marketing and advertising at the agency headquarters. Country Thunder also holds two festivals in Canada each year.

Country Thunder announced the partnership March 17, and though it’s not the first time CBP has sponsored the event, it is the first time the agency will have an in-person recruitment booth. The upgrade is part of an effort to hire more Border Patrol agents, as well as port of entry officers and Air and Marine Interdiction agents.

The agency is “frugal” when choosing its sponsorships, selecting events that are likely to bring about “good quality applicants,” she said. 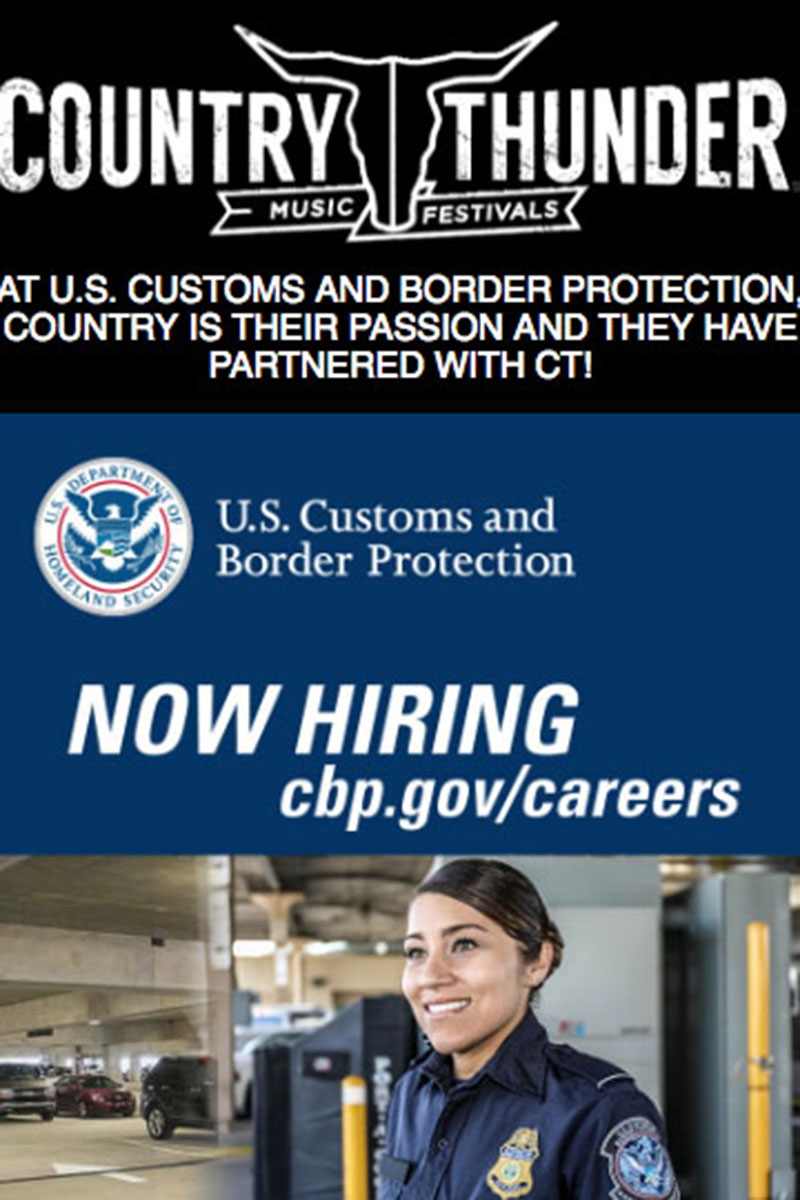 A screenshot displays a portion of County Thunder’s March 17 email announcement that the festival is partnering with U.S. Customs and Border Protection. (Screenshot image)

“We ask recruits coming in what they like to do in their off-time to see what areas we should look at,” Ursu said. “We’ve seen that there’s a lot of applicants that we’ve had that have expressed interest in Country Thunder or music festivals so that’s why we decided to explore it and see what kind or return on investment we have.”

Uniformed CBP agents will be at the booth talking to prospective applicants and passing out flyers, she said, though all applications must be submitted online.

In addition to the booth, country music lovers can expect to see commercials on the Jumbotron, banners throughout the venue and an honor guard during the National Anthem, Chen Barry said in an email.

Gerry Krochak, director of marketing and sales for Country Thunder, said the festival was happy to host CBP’s sponsorship and the agency was likely seeking to stand out amid more typical concert sponsors, like Budweiser and Jack Daniels. Country Thunder’s booths have always been diverse, he said.

“The Army might be set up right next to a Phoenix Suns activation which might set up next to an insurance agency which might be next to someone selling straw hats,” Krochak said. “I think most of it is an awareness, it’s a presence, it’s a visibility, it’s a brand position. I think that’s what most sponsors are looking for when they come to a festival like this.”

Last year’s Country Thunder in Florence attracted more than 27,000 people, according to Krochak.

Many of these attendees come annually, like Karen Griffin of Peoria, 55, a business consultant for a fitness equipment company. She’s been going to Country Thunder for three years in a row and plans to make this year her fourth.

“I mean there’s confederate flags flying all over the place so they probably think it’s a good pool of young people who obviously want to build a wall, so ‘let’s work for the Border Patrol,’” she said. “… but I think it’s in poor taste. I also think it’s poor taste of Country Thunder to accept that at the event. People aren’t going there to look for a job, it’s a fun place.”

Danny Hoggatt, 23, of Phoenix, also attended the last three festivals, often with one of his friends who is a Border Patrol agent. He said the sponsorship is a great idea and plans on checking out the booth spurred by a continuing interest in law enforcement.

“There’s a lot of good people that go to Country Thunder and I’m sure many of them are looking for a job,” he said.

Controversy over the sponsorship at the festival is unlikely, Hoggatt said.

“I think the laid back atmosphere will continue,” he said. “Everybody is there to have fun. It’s not all political, nobody cares about anything, so I don’t think there’s going to be any controversy over border patrol or immigration.”

CBP also sponsored the Spartan Race in Fort McDowell, north of Fountain Hills. Radio ads for the agency aired during the most recent University of Arizona men’s basketball game in the NCAA Tournament.