PHOENIX – Michelle Thomas, the founder of nonprofit Mocha Princess, said there’s a black-owned business out there “for anything you need.”

Thomas, who also wrote a Marcus Garvey Activity Book, plans to participate in the Black Owned Business Expo this weekend in Phoenix to help spread that message.

Ireya Thomas-Hawkins put together the expo with the help of the American Legion and friend Chyna Brown to promote black-owned businesses to the public and allow businesses to display what they can do for the African-American community.

Thomas-Hawkins, owner of FinallyItCreations and Events, drew inspiration from the Black Wall Street Phoenix Annual Holiday Extravaganza. Instead of charging a minimum of $40 for admission, she wanted to make the event free.

The expo will feature 30 organizations, including nonprofits and established and new businesses that will offer products such as jewelry and services such as law and real estate. 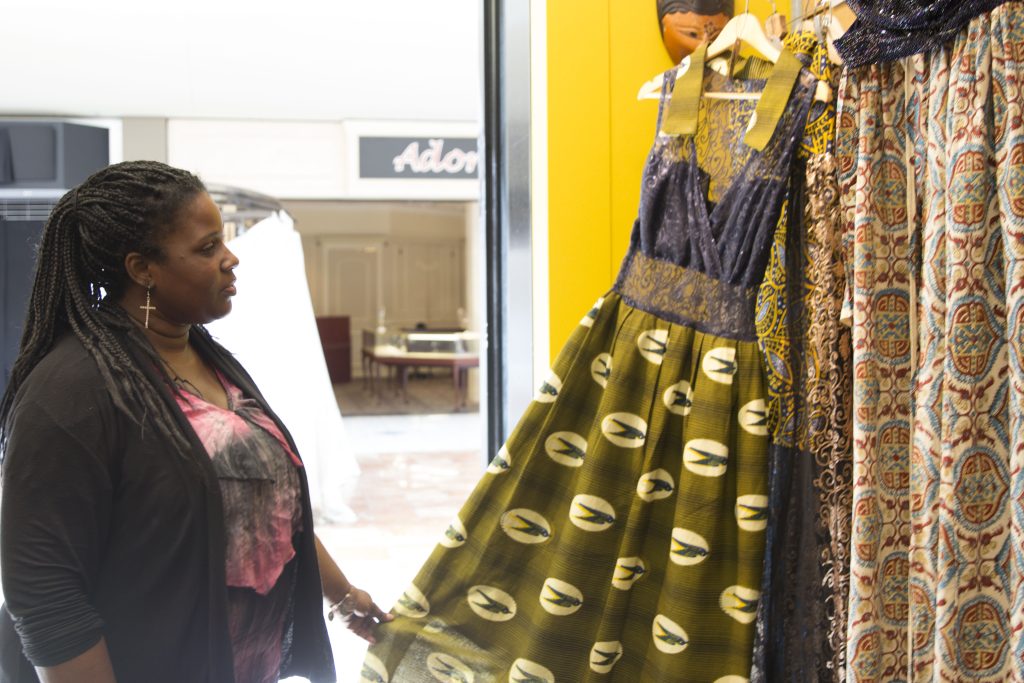 Shawanna Thompson shows off one of her designs in her store Akila Oluchi Studio Boutique in Metrocenter Mall in Phoenix. Thompson will display her work and other products at the Black Owned Business Expo. (Photo by Chelsea Shannon/Cronkite News)

For business owner Shawanna Thompson, this expo will help educate people about where she is and what she provides.

“Especially here in Arizona – with all the African-Americans and Africans … all spread out – this is definitely needed,” said Thompson, who owns Akila Oluchi Studio Boutique.

“In the ‘20s, the black dollar circulated 36 to 100 times, so that means that it stayed in the community up to almost a year before it left,” Thomas-Hawkins said.

In 2015, African-Americans made up 13.3 percent of the population of Arizona, according to the U.S. Census. But black-owned businesses accounted for only 2 percent of the total number of companies in the state, according to 2007 figures, the latest available. In comparison, about 7 percent of business owners were black nationwide, according to a previous Cronkite News article.

When selecting the venue of this event, Thomas-Hawkins and Brown, owner of Malkia by Chiraye, decided to host it at the American Legion,1624 E. Broadway Road, in South Phoenix. The event runs from 11 a.m. to 3 p.m. Sunday.

“It is literally in the heart of the black community,” Thomas-Hawkins said.

Thomas-Hawkins said she hopes to bring more community building events for African- Americans to the Valley.

Both Thomas-Hawkins and Brown both recently decided to focus on their businesses full time, which made them anxious.

“You gotta keep at it. You gotta stay focused and determined,” Thompson said when asked what advice she would give a new business owner. “There are going to be a lot of downtimes, but you can’t give up.”