LOS ANGELES – When Michael McDowell first visited the Phoenix Kart Racing Association track, it was not to drive but to clap and cheer for his brother’s friend. Engulfed in the competitive atmosphere and a witness to Arizona’s love for the sport, the experience captivated him.

It did not take long for the racing bug to bite and McDowell quickly transitioned from supportive spectator to competitive racer.

“I was there every week, every other weekend, from the time I was 8 years old until I moved away in 2004,” McDowell said. “It’s where I grew up.”

He has indeed grown up. McDowell, 32, has competed in all eight races in the Monster Energy NASCAR Cup Series this year and finished in the Top 20 twice. Leavine Family Racing has fully committed to McDowell as the driver of its No. 95 Chevrolet and will send him out to Richmond, Virginia, this weekend to race in the Toyota Owners 400.

To appreciate McDowell’s career is to understand his background.

After winning kart races in Arizona as a teenager, he decided it is what he wanted to do for a living. By 19, he was competing in the now defunct NASCAR Rolex Grand-Am Sports Car Series and debuted at NASCAR’s top level, then called the Sprint Cup series, at the 2008 Goody’s Cool Orange 500 in Martinsville, Georgia.

“The first thing I remember was the cold and snow right before the race at Martinsville,” McDowell said. “I had enough nerves already, but the snow was making me shake. It’s an intimidating place. It’s a cool short track but you’re bumper to bumper for 500 laps. It’s intense.”

McDowell was running what he calls “one of my best races to date” before a collision ruined a possible lead lap finish. The strong start and lack of a satisfying result would foreshadow the toughest part of McDowell’s career to date: life as a “start-and-park” driver.

“Start-and-park” is the term used to describe the practice of deliberately running an incomplete race in order to receive the prize money earned from qualifying and participating while not incurring as much damage to the car. Mechanical failures often are listed as the official reason for shutting the car down early.

“I think it was an effect of the economy,” he said. “When fans can’t spend money to come to the race, the sponsors don’t want to support as many cars and so some drivers don’t get the funds they need to run the whole race. It’s a chain reaction.

“When you (start and park), you can keep more money and your car is in good enough shape to qualify for the next race.” 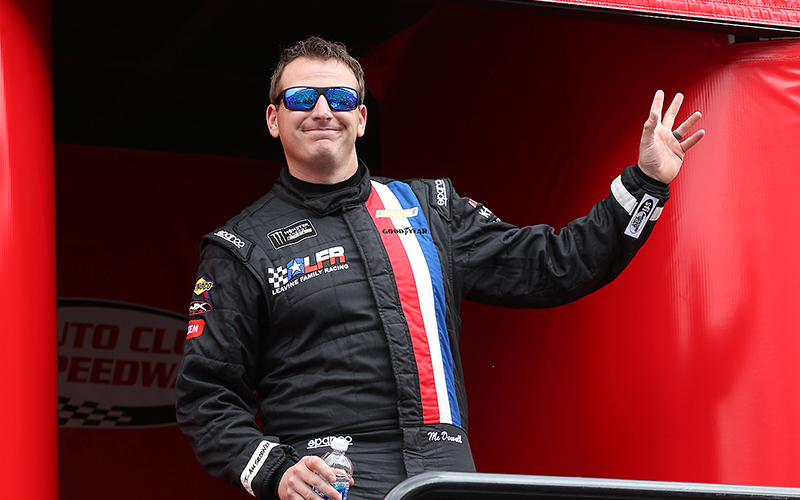 Michael McDowell, who grew up in Arizona, love auto racing as a youth. Now he’s a NASCAR driver. (Photo courtesy of Juan Ocampo)

McDowell, as a young driver with little financial backing, was forced to “start-and-park” to stick around at the highest level. In 2009 and 2010, McDowell started 32 Sprint Cup Series races and finished just one. In 2011, 2012 and 2013, the popular NASCAR blog “Last Car,” which tracks the drivers who finish at the very bottom in every race, named him their LASTCAR champion as the driver who brought up the rear the most. During this time, McDowell also drove in the Xfinity Series, the second-highest level of NASCAR. Here, he didn’t have to “start and park.”

“I’m not going to sugarcoat it, it was hard for a long time. I love being in NASCAR, I love being in the sport and it provided for my family,” McDowell said. “But, at the same time, I also never really desired to not be competitive while doing it. It was always about being in a competitive spot and winning races and championships. But, it got to a point where that wasn’t a possibility. For me to survive in the sport, it’s what I had to do.”

One way McDowell kept his competitive fire burning and made his last-place finishes enjoyable was by setting small goals. It allowed him to keep some sort of measurement of his development.

“Whether it was qualifying goals and then for the race, we’re only going to run 30 or 40 laps but I’m going to get to this spot before I come in or pass this car,” he said. “Even though they’re small goals, they were important to have so that you felt like you were accomplishing something.”

In 2014, McDowell’s perseverance began to pay off. He finished 14 of 19 races in the Sprint Cup Series, including posting a seventh-place finish in the Coke Zero 400 at Daytona International Speedway. He has increased his number of races completed every season.

In 2016, he raced just once in the Xfinity Series and for the first time in his NASCAR career, took home the checkered flag. After the victory at the Road America 180, McDowell reflected not in his own resolve, but in the constant support of those around him.

“I remember just thinking about how many people were a part of helping me get there,” McDowell said. From the beginning to that point, there had been so much sacrifice and commitment from other individuals and teams and partners and friends and family. There were lots of sacrifices to get to that point.”

His racing in the Sprint Cup Series was the best of his career, thanks to consistent backing from Leavine Family Racing and new crew chief Todd Parrott.

In their seven races together in 2016, McDowell finished on the lead lap four times, recorded one Top 10, another Top 15, a 16th, an 18th, and only one result worse than 23rd. Parrott has been a top level crew chief since 1995 when he worked with Dale Jarrett. Jarrett and Parrott raced together for eight seasons, finishing Top 15 each time and first in 1999.

“When Todd came on board, he was able to bring more depth and insight to our cars and car builds,” McDowell said. “At the time, we thought we were up to spec but we really weren’t. He just brought a whole lot of knowledge and experience and with that came results. We picked up significantly when he was brought onto the team.”

Leavine Family Racing acquired its first full-time charter for the Chevrolet No. 95 car and fittingly chose McDowell, who had 213 career starts in the Sprint Cup Series but had never been scheduled to compete for a full season. A full schedule of races with a single team and without “start and park” means a lot to the 34-year-old driver who for nearly four years took the wheel with a lot less.

“When you’re locked into the race and you have points and you have the opportunity to be competitive, it makes you very thankful,” McDowell said.

“You can only be in good race cars with a good team and good people around you. The driver is a very small part of the equation of success on the race team, I believe. The car and the team makes up around 80% of whether or not you’re going to have success,” McDowell said.

“You only get opportunities to shine when you’re in good race cars.”

From his time weaving gokarts around the curves of PKRA, through his times as a driver sapping his spirit in order to remain in the profession he considers a lifelong love, all he’s wanted is exactly that.

About Cronkite News 2677 Articles
Cronkite News is the news division of Arizona PBS. The daily news products are produced by the Walter Cronkite School of Journalism and Mass Communication at Arizona State University.