PHOENIX — Major League Baseball is walking a fine line. The sport is trying to build its fan base by speeding up the game and eliminating unnecessary dead time between plays.

On the other hand, baseball purists wonder why the game needs to be changed at all. The languid pace of baseball is one of its charms, they argue.

“I’ve tried to be clear that our game is fundamentally sound, that it does not need to be fixed as some people have suggested,” Commissioner Rob Manfred said while visiting the Cactus League during spring training. “At the same time, I believe it’s a mistake to stick our head in the sand and ignore the fact that our game has changed and continues to change.”

The commissioner cited stats referencing an increase in home runs since 1980 (up 32 percent) and the number of strikeouts (up 67 percent). Yet, there are issues that concern Manfred, including the increased use of relief pitchers over the past 30 years, which slows the game down.

Manfred voiced his frustration during the offseason about the lack of agreements between baseball and the Major League Baseball Players Association, but he added that it isn’t “all that Earth-shattering” that progress wasn’t made on rules about a manager’s trip to the mound this season.

“I’m firmly convinced that our fans, both our avid fans and casual fans, want us to respond to and manage the change that’s going on in the game,” Manfred said. “I’m certain that our job as stewards of the game is to be responsive to fans, and I reject the notion that we can ‘educate’ fans to embrace the game as it’s currently being played.”

In recent years, baseball has consistently struggled to shave time off the length of games. In 2015, MLB games dropped to an average length of two hours and 56 minutes, a six-minute decrease from 2014.

But according to Baseball Reference, the average length of a nine-inning game bounced back up to three hours last season.

To address this, MLB imposed a no-pitch intentional walk rule this season. Rather than require the pitcher to throw four balls, a manager signals to the home plate umpire and the umpire awards first base to the batter.

Other pace-of-play changes include allowing managers 30 seconds to decide whether to challenge a play or not.

Manfred rejects the suggestion that the rule changes are just about the time of games.

“We have never set a time goal,” Manfred said. “It’s about pace and action. It is about pace in the sense that we’d like to take dead time out of the game. It’s about action during the game that keeps fans engaged.”

These changes are just the beginning of what the commissioner wants to do. Other areas of focus are the addition of a pitch clock, changing the rules for visits to the mound, and raising the bottom of the strike zone by about 2 inches.

Yet, while Manfred is trying to tweak the game to keep fans engaged, he also recognizes baseball’s popularity as it is.

Critics of rules changes point out that the game played in the big leagues is increasingly different than the game being played in colleges and high schools.

“I think that it is ridiculous that there is thought about limiting the number of relief pitchers a team can use in a game,” Schuck said. “The intentional walk rule is a joke. What, did they save, about a minute? Plus, how many intentional walks are there in a game? Most games there are none.”

While these changes don’t affect high school baseball, there’s a lack of consistency to the game that didn’t exist prior to changes made in recent years.

Last season, baseball changed the rules for runners sliding into second base. Gone are the days when runners can attempt to break up a double-play and take out a fielder. Runners now must make a “a bona fide attempt” to slide into the base and stay on the bag. They also can’t change their “pathway to the base” during a slide.

While these are rules in the major leagues, the do not apply to baserunners in high school.

“That is not what I concern myself with,” Schuck said of teaching players the sliding rules. “If they get to the next level, they will learn it.”

McClintock High School baseball coach Paul Mather believes changes in the big leagues to speed up games are unnecessary. Strategy makes up for the length of games, Mather said.

“I love the way the game is played now, and I would not want to consider any rule changes,” Mather said. “If you truly want to speed up the game, then cut back on the number of commercials that are run between innings.

“These moves always seem to be more about how MLB can make more money, not in keeping the integrity of the game.” 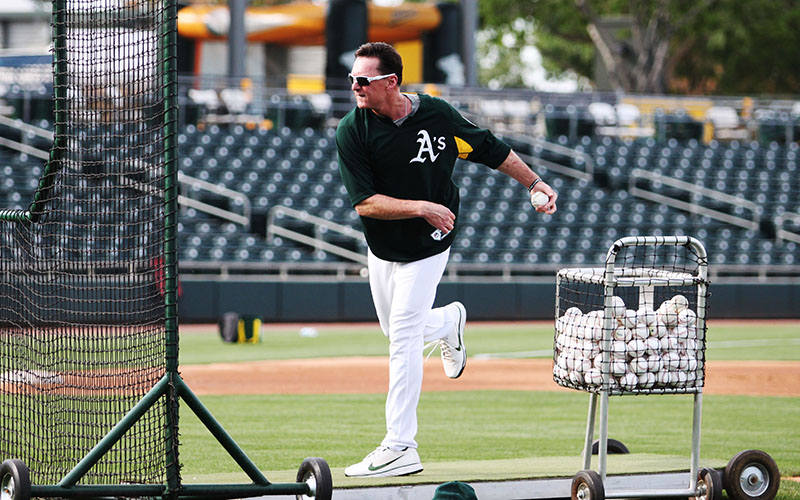 Schuck and Mather echoed some big league managers. Oakland Athletics manager Bob Melvin said during spring training that it’s tough for him to see where the game needs to be sped up.

“When you’re a traditionalist, the games are run a certain way, and now you’re making some people do some uncomfortable things,” Melvin said. “It’s tough for me to take a step back and look at it as a fan and say, ‘I need to speed the game up.’”

Another rule change baseball is contemplating would put a runner at second base when a game goes to extra innings. It’s a tactic being implemented in the minor leagues and was used during the 2017 World Baseball Classic.

Angels manager Mike Scioscia said baseball has tried to make the rule changes as smooth as possible, and there has been good communication about what baseball is doing.

Still, he doesn’t believe a runner starting at second base in the 10th inning will do any good for the game.

“I don’t know how much communication it’s going to take to wrap my arms around putting a guy at second base in the 10th inning,” Scioscia said. “It’s not going to happen.”

Schuck agrees. He doesn’t believe that putting a runner at second will help young hitters with situational hitting.

“I believe that is learned in practice,” Schuck said. “As far as hitting, if you have a (runner) at second, the hitter better be looking to drive him in.”

The one rule that drew the least negative attention was the idea of a pitch clock. Schuck said he’s seen the rule implemented in tournaments, like the National Baseball Congress World Series, a summer collegiate baseball organization headquartered in Wichita, Kansas.

“It really has no effect once the players get used to it,” Schuck said. “They are usually used to it after a game or two.”

Melvin said that rule may actually help pitchers in the long-run.

“I think guys take (time between pitches) to an extreme a little bit,” he said. “Maybe the pitch clock gives you the awareness that, ‘I should deliver the baseball a little bit quicker.’” 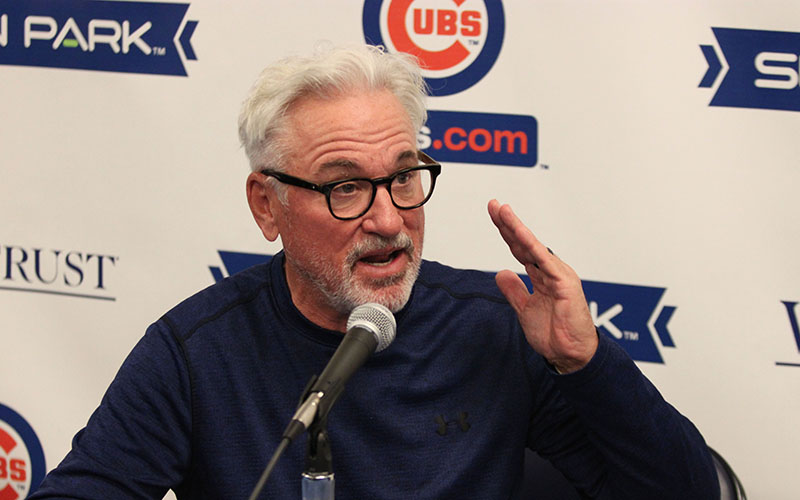 Cubs manager Joe Maddon addresses the media prior to a spring training game in Mesa. (Photo by Kody Acevedo/Cronkite News)

Cubs manager Joe Maddon said he’s all for experimenting with rule changes in the minor leagues.

“Do it. Do it and see what it feels like,” he said. “I think it’s a great petri dish for all these kind of things. So I’ll keep an open mind.”

Giants manager Bruce Bochy, the longest-tenured manager in the National League, is a supporter of Manfred’s approach. He said in order for baseball to survive, the game needs to increase interest among the next generation.

“It’s important that we do all we can to keep the game moving,” Bochy said. “I’m all for pitchers working with a good tempo because there are times in a game that (it) slows down too much, and you don’t want fans to lose interest.”

Still, baseball purists like the A’s Melvin argue that one of the beauties of baseball is that the time of games is not predetermined.

“I understand maybe the younger generation doesn’t like the time of these games,” Melvin said. “I think one of the things I love about baseball is that it’s timeless and there’s no clock. It’s all about innings and outs. That’s the way time is measured in baseball.”