Despite the blustery demands for reforms in the wake of the Fiesta Bowl scandal in 2011, little changed for Arizona politicians and the special interests who lobby them. As a result, Arizona legislators have regularly been offered, and have accepted, tickets to the three state universities’ athletic events for free.

So on Saturday, while Arizona’s cash-strapped families figure out a way to get in front of cable television to watch the UofA Wildcats take on the ASU Sun Devils, some Arizona legislators will take in the game gratis.

The scandal involved Junker “directing reimbursement of approximately $25,000 in contributions made to federal election campaigns between 2006 and 2009, and additional amounts made to the campaigns of state and local candidates. Tax returns were filed with the IRS for the 2007 and 2008 tax years, which falsely reported that the not-for-profit Fiesta Bowl made no contributions to political campaigns and engaged in no lobbying activities,” according to the FBI.

In 2011, the Arizona Capitol Times reported that the Fiesta Bowl scandal involved “28 lawmakers, four other elected officials, a lobbying firm and a lobbyist.” The Arizona Capitol Times report included Maricopa County Attorney Bill Montgomery’s call for an “overhaul the state’s lobbying laws” which he thought should include an “outright ban” on gifts.

In 2011, it was “against the law for lawmakers to accept gifts – including game tickets – unless they are offered to the entire Legislature, one of its full chambers, or a committee,” reported the Arizona Capitol Times. “Lawmakers also must annually report gifts if they exceed $500.”

In 2012, then-House Minority Leader Chad Campbell released his Government Transparency and Accountability Plan. Included in the plan were “steps that the democrats would favor “to restore public confidence in Arizona’s state government” after the bi-partisan Fiesta Bowl scandal.

But nothing changed according to legislators. The universities can still give away tickets as long as they offer them to all legislators.

Some legislators like Rep. Rosanna Gabaldon, a democrat out of LD2, are more eager to snatch them up than others. Emails produced in response to a records request by the Arizona Daily Independent in its investigation of a “trade mission” to Mexico earlier this year, show that Gabaldon is a fan of the Wildcats. 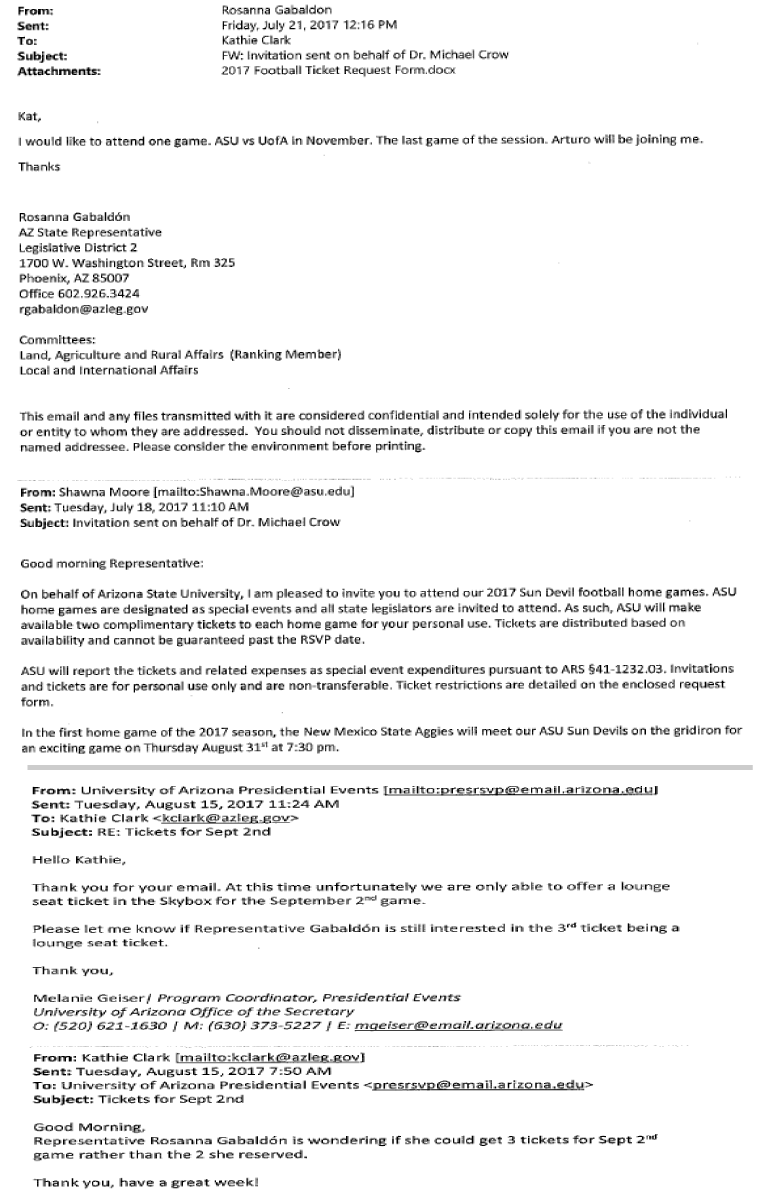 At a rate of approximately $24,000 for 120 days, legislators’ annual pay would be approximately $72,000 plus. Given that many legislators also hold jobs and/or own businesses, and perform duties associated with their jobs or businesses during the Legislative Session, their income is considerably higher than most of their constituents.

Most of their constituents aren’t offered free tickets and meals. Unless of course, you count the meager meals they buy with food stamps.

When the ADI asked a couple of legislators, off the record, if they accepted freebies to the games, one told us that he had accepted tickets in order to “show his support for the universities.” When we asked if purchasing tickets wouldn’t be a better way to show support, he did not respond.

While Rep. Gabaldon is sure to enjoy the game today, there are countless kids and parents in her district, who do not have the same opportunity.

But it isn’t just the universities’ sporting events that legislators have access to.

Check back Monday for more.