PHOENIX – Firefighters routinely work on staying in shape with training that goes beyond running or doing – think of punching a hole in a ceiling or carrying 100 pounds up the stairs.

“If you are Tier Four, the least physically fit, we will remove you from front line service,” Nies said

Aerobic fitness and resistance to muscle fatigue are key to firefighters passing a physical fitness test, according to a 2010 University of Maryland study, as written in EHS Today.

“You can go to the gym, and you can work out, and you can be physically fit, but as soon as you put on a pair of turnouts and start working with various tools that firefighters work with, it’s a whole other ball game,” said Leigha Graziano, a firefighter with the Glendale Fire Department.

Firefighters own and operate the Great Ape Gym in Phoenix, designed to get current and aspiring firefighters in shape.

Firefighters – or those working to become firefighters – drag tires across a yard, punch holes into an “attic” to ventilate smoke, carry 75 to 100 pounds of gear on their back as they walk up and down stairs, pound sledgehammers on cars to mimic swinging an axe and practice opening and closing fire hydrants. The moves build endurance, muscle and grip strength as they practice skills needed in the field.

“It first just started really small – just a couple firemen in the backyard of somebody’s house working, and more people kept showing up,” said Chris Fleming, a firefighter for seven years and one of the five owners of the gym.

“There’s no real place for us to go to hone these skills except for something like this,” Fleming said. 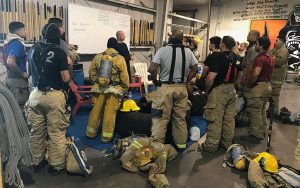 Firefighters huddle for a talk at an exercise gym before starting their session. (Photo by Sydney Isenberg/Cronkite News)

Zachary Zabek, who is applying to several fire departments, said firefighter-focused training gives him a competitive advantage over other candidates and helps him stay safe.

“From lifting, cardio and doing the skills courses, those help prevent those injuries from occurring,” Zabek said.

Nies said working out requires balance between exercise and rest, so the department limits physical training.

“We don’t want our firefighters to expend themselves in physical training and not be able to respond physically to calls,” Nies said.