PHOENIX – “I love how you treat me,” was one of the last things 18-year-old Mitchell Warnock said to his mother before committing suicide a year ago.

“I couldn’t stop screaming. My husband found him,” said Lorie Warnock, Mitchell’s mother. “If I had found him, I think that I would have to be institutionalized. I don’t know how my husband bears each day knowing what he saw.”

According to the Centers for Disease Control and Prevention, Arizona ranks 13 th in the nation for deaths by suicide, and teens ages 15 to 17 years are at high risk for suicide death in Arizona.

Since 2009, teen suicides have increased by 81 percent in Arizona, according to a 2016 state report on child fatalities.

Warnock, a Mountain Pointe High School English teacher, described her son as a “shy, quiet, and pretty introverted kid.” He was diagnosed with depression and anxiety at the beginning of his junior year at Corona del Sol High School. He previously had been diagnosed with obsessive compulsive disorder and attention-deficit disorder.

“Suicide is obviously a very uncomfortable and scary topic for a lot of people, students and adults alike, but it raises an education level and awareness to have the conversation and not to be afraid,” said Susan Cadena, prevention coordinator at the Gilbert School District.

Cadena said the district has behavioral health teams year-round in their schools to help identify any student who is in crisis or needs an evaluation.

Although the teams and programs are there to help the students, Cadena said the one thing they keep stressing to everyone is that schools can’t do without the help of the community, families and the law enforcement. 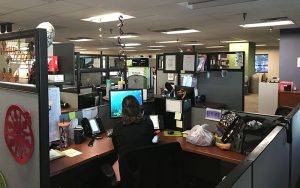 “We have students in our classrooms for long periods in a day,” Cadena said. “When we all work together, we see that it works really well, and kids can see that while it’s an ugly topic to talk about, the students don’t feel like we’re not willing to be there with them, no matter how ugly it gets.”

Paul Gagnon, principal of Queen Creek High School, in a letter to parents, wrote that in addition to meeting with individual students, they also asked Empact Suicide Prevention Center to conduct presentations for freshman through senior classes to teach students skills on how to help themselves or others.

The district is also offering a new a ten-week curriculum, called “Life Skills,” to 9th graders in the Tempe school district to learn about healthy relationships, and social and emotional wellness, she said.

Liewer said such programs and services created a dialogue between students and encouraged them speak up if they notice warning signs of suicide in their friends.

Warnock said Corona is working towards creating a trusting relationship between the students and staff but she thinks there is more that could be done.

“I’m not satisfied that every ‘I’ was dotted and every ‘T’ was crossed when it came to him,” Warnock said about her son.

From guidance counselors to resources like the 504 Plan, which ensures children with disabilities are accommodated in schools, Warnock said she and her husband did everything they could to help their son but wished school officials had done more to guide him through his struggles.

“I wanted to make sure, don’t let this one fall through the cracks, he’s the quiet one that will just sit back and before you know it, you might end up losing him academically,” Warnock said

Warnock said educating a child is about educating the whole child, not just the academic portion.

“You have to understand that these kids are bringing in money for you, in terms of daily attendance,” Warnock said about a school district. “But they may also come with some challenges. The foundation needs to be strong before you push them in the direction of academic rigor.”

“We need as many eyes as possible on the kids,” she said. “We all have blind spots.”

Warnock is now focusing on the other students to make sure they get the attention they need by making suicide prevention education a priority in every school across Arizona.

“This is no longer about him. I’m concerned about the 25,000 other students in our district who aren’t being noticed,” she said. “In general, a lot of kids like Mitch get missed.”

Reaching out for help

Katey McPherson, a former Gilbert school administrator and the executive director of the Gurian Institute, said if a student suicide has already happened at a school, there is a higher chance of it happening again.

“We can’t afford to lose another kid,” she said.

But boys are less likely to call for help, McPherson said. ““Boys, especially in my opinion, are really good at masking how they’re feeling.”

According to the 2015 Arizona Child Fatality Review report, boys comprised 72 percent of the suicide deaths compared to 28 percent in girls.

A problem both Warnock and McPherson mentioned was the stigma of talking about suicide.

“If adults have a hard enough time talking about it, we can’t expect kids are going to talk about it,” McPherson said. 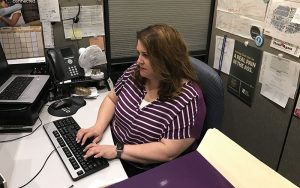 Heather Brown, the prevention administrator at Mercy Maricopa Integrated Care, is working to eliminate that stigma through training classes like safeTALK and Mental Health First Aid to teach the public how to identify, understand, and respond to mental illnesses.

“There are so many people who want to help,” Brown said. “They just don’t know how, they don’t want to say the wrong thing, they don’t want to make it worse, or they think it’s not their business. So through trainings, people actually realize that it’s everybody’s responsibility.”

McPherson said schools should improve their systems to better prevent suicides. Most schools follow a standard protocol after a suicide, such as holding an assembly or putting Teen Lifeline stickers on the back of student IDs.

But “there are no universal strategies being used, everybody is just doing this hodgepodge reactiveness,” she said.

When a person already has a plan to commit suicide and has called for help, McPherson says she will refer them to crisis centers, such as Empact Suicide Prevention Center, which provides crisis intervention teams that can come to houses and schools in addition to handling phone calls.

A lifeline for callers in trouble

Lisa Clark, a clinical coordinator at Empact, is one of the phone operators at the Tempe center. Most of the times she says it will be a lot of listening and asking questions about the caller’s life and relationships.

The beginning of the phone call usually involves a safety question to make sure the caller is not in any direct harm. 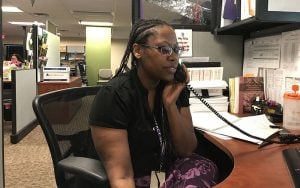 Lisa Clark, a clinical coordinator at Empact Suicide Prevention Center, talks to a caller who is discouraged about problems in his life. (Photo by Shawna Truong/ Cronkite News)

From there, it is a lot of active listening, building trust, and problem-solving.

“So tell me about yourself. What do you enjoy doing in your free time?,” are some of the things Clark asks during a call to get to know the caller better.

“You don’t want to give advice. You think you know what you should do, but that’s not for the benefit of the caller,” Empact crisis call manager Denis Thirion said.

At the end of the call, Clark tells them if they are ever in trouble, feel like there is no way out, or just want to talk, to call back.She repeats that a few times to make sure they understand.

“The ideal thing is by the end of the phone call, they feel like they came up with the solution. That’s our goal,” Thirion said.

If you are thinking about suicide, worried about a loved one, or need emotional support, the National Suicide Prevention Lifeline is available 24/7 across the U.S at 1-800-273-TALK (8255)
*Press 1 for veteran crisis line

Crisis Text Line is also available 24/7 at 741-741 to text with a trained crisis counselor.