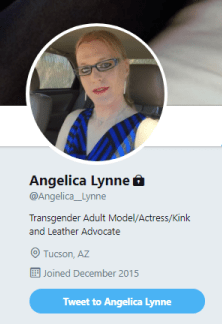 Staff at the Scripps offices in Tucson, Arizona reported seeing fellow co-workers visibly shaken this week after they received a pornographic message from a co-worker. Recipients reported feeling victimized by the graphic image of Angelica Foti, and what appeared to be the genitals of men.

When Angelica first announced her transition, co-workers were advised to treat her with “kid gloves.” Over time, resentment of the special treatment of Foti has grown. As a result, the message she sent was not only traumatizing for some, but raised questions as to fairness in the workplace.

In December, Foti set up a gofundme account to collect contributions to pay for items on a list of surgeries she wanted as a part of her transition:

My name is Angelica and I am a Transgender female. I am about a year and a half into my journey and facing what all of us who decide to go down this road face…the high cost of medical procedures. There are so many surgeries that are needed to fully transition.

I work hard and have been lucky enough to be at a company that has been completely supportive of my transition. But even as a fulltime employee, I cannot cover these costs on my own. So here I am my dear friend asking for your support in this matter.

As an older transitioning adult (44 years old at the time of writing this), time is limited. I have been on HRT drugs for about 14 months at this point and my body has changed, but the changes I have are about all I am going to get. Unfortunately, once you move beyond a certain age, your body can only change so much without surgical help.

I do have my Breast Augmentation Surgery scheduled for December 27, 2017…Merry Christmas to me! But It is being done on credit, then I am maxed out. This is the one surgery I can (sort of) do on my own. Beyond that, my options are limited.

After the breast augmentation, the other two important surgeries are of course the Vaginoplasty/Labiaplasty and the Voice Feminization Surgery. The best surgeon in the world for VFS is in South Korea. Yeson Voice Center . The surgery is around $7400 plus flight, room and board and food.

This is specifically what I am asking for with this fundraiser. $16,000 to cover my VFS and the deductible for my GRS.

I would love other surgeries as well, but these are the priorities to allow me to mostly pass.

Time is critical to complete my transition by the end of 2018. I have my consultation set with the GRS surgeon on December 5, 2017 and will have the surgery in November 2018. I would love to have my VFS earlier in the year to have time to recover prior to having a third major surgery in 12 months.

As you can see, I am not asking for the world. I need your help moving towards my goal of being me.! Anything you can give is so greatly appreciated. Also, please share this across Social Media and help spread the word.

Thank you so much in advance; you are appreciated! <3

To contribute visit Being Angelic(a)

Since the gofundme account was first set up in December, Foti has only received contributions from 3 people for a total of $204 out of her $16,000 goal.

KGUN staff have been struggling with the impending retirement of anchor Guy Atchley. Atchley, who is retiring at the end of March, has served as a calming force at KGUN, which has according to staff descended into confusion and chaos.

For her part, Foti has told co-workers that she is focusing on her education because KGUN “is a sinking ship.”