The farm, named Sharing Life’s Abundance, is owned and operated by Donna Bruce. She’s a registered nurse who works at the hospital 40 hours a week. Since her husband died last year, she operates the farm on her own.  She has no hired staff, just friends and neighbors who lend a helping hand when they can. 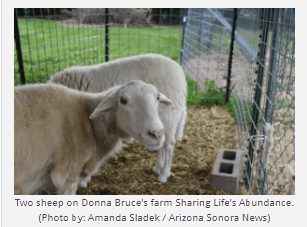 According to the 2012 U.S. Census of Agriculture, 45 percent of the farmers in Arizona are women, making it the state with the highest proportion of women farmers in the country. Women make up 30 percent of farmers in the United States as a whole, and are at the forefront of change in modern farming.

Women generally have smaller farms, use sustainable practices and favor growing food over commodity crops such as cotton and wheat. The average size of farms with female operators is just 359 acres, compared to an average farm size of 1,312 acres for all farms in the state. 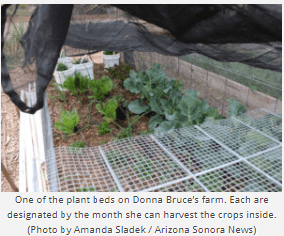 In the book The Rise of Women Farmers and Sustainable Agriculture, the five authors credit the rise of women in agriculture to a few reasons, including more women pursuing opportunities in organic and sustainable farming on smaller pieces of land with less equipment needed. Women also have been establishing farms in unconventional ways including adding educational components.

Women farmers have been successful in developing networks to share information and found that “this kind of peer-to-peer networking has been an important innovation for women farmers,” the authors note.

Bruce says women farmers in Arizona share a strong sense of community. She’s in contact with many of the state’s female farmers, in part through multiple, private Facebook groups where they share tricks of the trade. 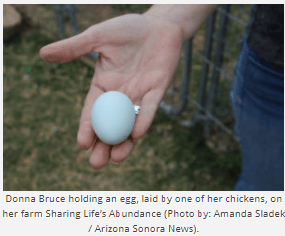 Bruce has been farming since she was 12 years old. She would follow her grandfather around when he gardened and raised rabbits and chickens. He taught her about sustainability –  planting one’s own seeds, using manure from one’s animals and growing the animal feed all on the property. Bruce has used sustainable practices at her farms since, including aquaponics.

At the center of Bruce’s farm is family. Most of the food and milk she gets from her farm is shared with her adult children and family. The rest is sold at local farmers markets.

“My kids ate better than the next-door neighbors who were the kids of a doctor and a lawyer,” says Bruce.