When Avra Valley Coalition activists asked Federal Highway Administration Deputy Aryan Lirange why the Interstate 11 Tier 1 Environmental Impact Study planners would not release actual maps detailing their proposed routes, Lirange replied that “if people saw them it would upset them.”  He was right. 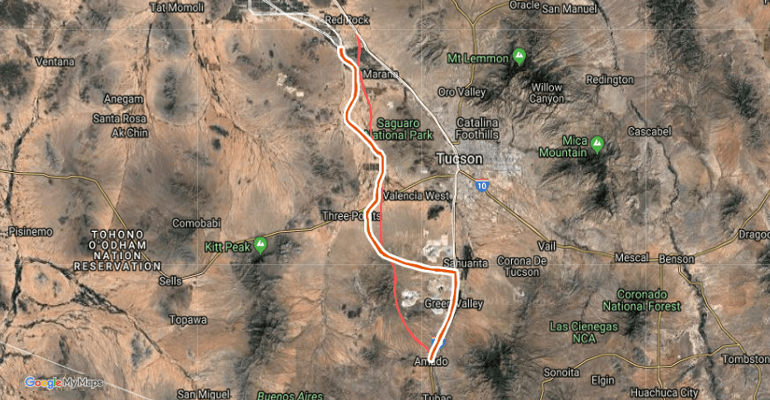 A Freedom of Information Act request generated maps dated March, 2017, showing a 2000-foot-wide swath of destruction through homes, businesses, and pristine desert.  Coalition activists then created an interactive satellite-view map of the proposed highway’s path so that people could see for themselves where they and their neighbors stood in relation to possible Eminent Domain taking of their property in the future:

The $15 million Tier 1 study looks at a 2000-foot-wide corridor.  A follow-up Tier 2 study would narrow that to 400 feet.  A decision of a “preferred alternative,” a choice between an Avra Valley route, improving the existing I-10 corridor, or the rarely-mentioned no-build option, is expected by the end of the year, with public meetings and comment period in January.  According to the Gordley Group, a private firm facilitating public involvement for the Arizona Dept. of Transportation, no locations or times have yet been decided, but they “want to accommodate the most people possible.”

The usual format for such public meetings is a formal presentation and slide-show, followed by one-on-one conversations with staff members.  No public comment or questions are allowed.  ADOT I-11 Study Manager and Sonoran Corridor Study Advisor Jay Van Echo, however, agreed at a Citizens for Picture Rocks community meeting August 21 to allow open discussion at the January meetings.  Jan Gordley confirmed that at the Sonoran Corridor public meeting September 26.

While there is no funding yet identified for I-11 or the Sonoran Corridor, and construction may be years in the future, decisions made in the coming months will forever impact those families and businesses in the path of the highway.  Opposition to the proposed Avra Valley route comes from many sources, including people directly affected, tourist destinations like the Desert Museum and Saguaro National Park, environmentalists, and many concerned with the planners’ stated intent to attract American company jobs to Mexico and to steal jobs from the U.S. West Coast to the Mexican Port of Guaymas.

Many would rather see taxpayer dollars spent on improving Interstate 10, which would also preserve existing jobs as well as not adding to truckers’ miles with an Avra Valley route.  But the I-11 planners seem to live in their own insulated world.  Recent invitation-only “Stakeholder Engagement Meetings” are described on the I-11 website without mentioning that those “stakeholders” got together and issued a public statement August 3 calling for I-10 improvements and stating that any Avra Valley route “is not acceptable.”

Citizens for Picture Rocks, a 17-year-old non-profit community group, has asked District 3 Supervisor Sharon Bronson to place on the BOS agenda the re-certification of Resolution 2007-343, opposing “the construction of any new highways in or around the County that have the stated purpose of bypassing the existing Interstate 10 as it is believed that the environmental, historic, archaeological and urban form impacts could not be adequately mitigated.”  To date there has been no response from Supervisor Bronson.