TUCSON – “Proposition 205 is a citizen-led initiative on the 2019 city of Tucson ballot.” This is about the only honest thing that proponents of the so-called Sanctuary Initiative have said in their defense of this ill-conceived attempt to circumvent the authority of the federal government regarding immigration law enforcement. In placing the concerns of members of the illegal alien population above that of their constituent citizens, by stepping into an area of governance that is not the City’s purview, proponents of this initiative in fact do everyone a disservice, making our community more unsafe, and severely handicapping the ability of local law enforcement to do their jobs in the process.

Contrary to what advocates have said, every member of our community already has equal protection under the law; it’s just those supporting Prop. 205 don’t like the fact that people in this country illegally are in violation of that law. There are ways to change that, legally, and Prop. 205 is not one of them. Here’s the main reason why that is the case: immigration law is entirely the jurisdiction of the federal government. Proponents of 205 don’t do the members of our legal immigrant population any favors either by conflating them with those here in violation of the law. No federal law enforcement agent is coming for immigrants!

Take the Immigration and Customs Enforcement (ICE) raids that have made the news in recent times. When they conduct such, it is to remove people who have already gone through the courts. They have already had due process and have still refused to go home; refused to play by the rules. The fearmongering of the ICE agents enforcing immigration laws must end, because it is that fear that is causing people to think they need sanctuary.

Aside from the dissembling in in the Pro 205 arguments, are the outright falsehoods about what Prop. 205 will and will not do. They argue that the strictures placed on federal law enforcement agents are relatively minor. They are in fact far-reaching, and clearly unconstitutional on a federal level as they force federal agents to submit to the lower authority of the City if the two were to work in concert on any law enforcement task. By the initiative’s own wording, in such cases, a federal agent of any kind, think FBI agent here, would have to agree not to arrest anyone without a warrant. Again, a federal agent who encounters an illegal alien, can in fact, by federal law place them under arrest. What are the odds of any agencies working with us with such strictures in place?

What about strictures on local law enforcement? Proponents say there are none. The truth is quite different. This initiative provides for an illegal alien to take a peace officer to court if detained or arrested by merely making the accusation that it was based on their immigration status. How does that help our officers do their job effectively, especially when working with members of the illegal alien community? The potential for frivolous lawsuits here is tremendous not to mention the cost to taxpayers who would be on the hook for the adjudication of these cases.

Proponents say Prop. 205 doesn’t violate state law, and so there is no fear of it being struck down on the state level. That’s rather optimistic, but even if well-placed the initiative is clearly in violation of federal law, and their law enforcement prerogatives.

We at Citizens for a Safe and Prosperous Tucson represent a mixture of Democrats, Independents and Republicans, citizens and non-citizens, who are standing up for the ‘sanctuary’ that truth brings to any issue and standing united against Prop. 205. Vote ‘no’.

To learn more and to join us, go to www.Citizens4Tucson.com. 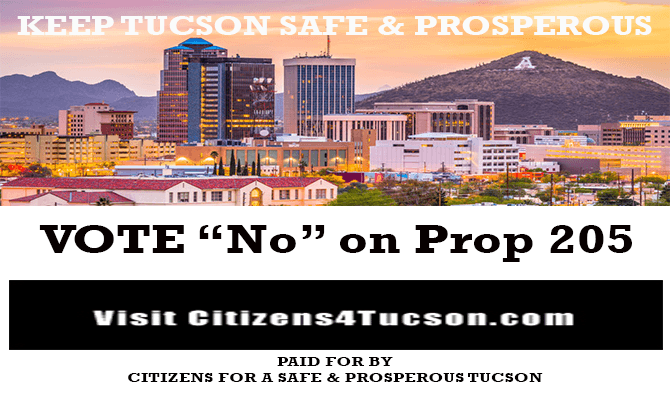