TEMPE – He has seen his young team go into two tough road environments and pull out hard-fought, scrappy wins at Michigan State and California.

Yet when Arizona State coach Herm Edwards talks about what his players have accomplished — and in particular, the 29 freshmen that have played this season — a bit of shock and awe is revealed in his voice. After the Cal victory, he called the Sun Devils “naive.”

In this instance, he meant that in the best way.

“They just kinda go,” Edwards said. “They don’t know any better. They don’t.”

As the 18th-ranked Sun Devils prepare to face Washington State on Saturday, four freshmen are listed as starters on the depth chart, including three true freshmen on the offensive side of the ball. And though Jayden Daniels isn’t the only true freshman starting quarterback in the country, Arizona State is the only school starting two true freshmen on its offensive line.

Their mindset is what has impressed Edwards. In his postgame interview at Berkeley, the coach said his young players “don’t know what they don’t know,” and credited his assistant coaches for helping them. Asked to elaborate during his press conference the week after the Cal victory, Edwards said players view football differently than when he was in college.

“Growing up, for me, the history of football was important, because that’s the era I lived in,” Edwards said. “Certain teams, certain eras, certain players, certain stadiums. The ambiance of all this stuff, it meant something to me growing up as a young kid.

“Not so much anymore, because there’s so much information out there, right? And they’re just kind of like, ‘Eh, OK, it’s Michigan State, we’re going there.’ Hard place to win. That would’ve been big to me, when I was their age.”

But it isn’t just Edwards who the young players have impressed by casting a blind eye at what they’re up against. 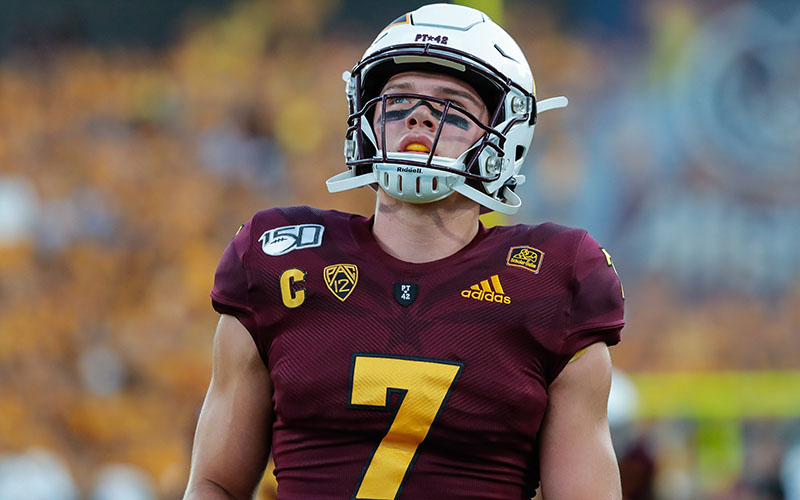 Arizona State freshman Ethan Long said he is able to zone things out when he runs onto the field. (Photo by Kevin Abele/Icon Sportswire via Getty Images)

Senior center Cohl Cabral said that youthful naiveté is “kind of an advantage” for the Suns Devils, especially when he looks back at his experience transitioning from high school to college.

“I remember when I got here, I maybe played in front of 1,000 people in high school, where now you show up at practice over the summer or in spring ball and you have 1,000 people at practice,” Cabral said. “It’s just one of those things that takes a while to get used to, especially if you’re playing in a place that’s known to be loud. They just don’t think about it. They go out and play, and that’s kind of nice.”

Freshman Ethan Long, who has played a little bit of everything offensively for the Sun Devils, said he played in front of 12,000-plus people while playing high school football in Oregon, but added that it’s “nothing like college.” He admitted he allows himself a chance to enjoy the scene when ASU is playing on the road, but his focus remains on the task at hand.

“Really, when I notice it is running out of the tunnel – just enjoy the moment and get to be a part of something so special,” Long said. “But when it’s on the field, it’s go time and zone everything else out.”

Daniels takes a similar approach. He said that part of his pregame warmup routine before ASU’s first two road games has included a moment with offensive graduate assistant and former Sun Devils quarterback Mike Bercovici to take in the view of the tens of thousands of people getting ready to root against him.

And Daniels has quickly shown that he has a knack for sending them quietly to the exits.

“Playing on the road is fun because you have everybody going against you. So being able to go on the road and win big games is fun,” Daniels said. “Just hearing the silence after the game, after we stunned Cal, ranked 15th team in the nation. So just going up there and being able to stun them, see everybody’s faces and knowing what we did on our side, it’s a big accomplishment.”

There has been plenty of noise about the youth of this ASU team, including from Edwards, who said that 29 freshmen (including redshirts) have seen playing time this season. But in Daniels’ mind, labels that distinguish how long a player has been on campus don’t mean much between the lines.

“We’re freshmen, but on the field, we’re a football player,” Daniels said. “People on the field don’t really just look at you like, ‘Oh, you’re a true freshman,’ or, ‘Oh, you’re a senior.’ You’re either our opponent or you’re our teammate. So just go out there – it doesn’t matter what year you are, your experience, how old you are. You’re just going out there and playing football.”

That mindset will be helpful throughout the season, but especially this week. And while their bye week provided the Sun Devils a chance to do internal evaluations and get healthy, Edwards said there are “some distractions that are looming.”

HBO and its documentary team arrived to begin work on the cable network’s 24/7 College Football series over the weekend. The HBO crew has been embedded with the team all week. And the Atlanta Falcons have used the team’s practice facilities ahead of their game against the Cardinals on Sunday.

“There’s a lot of things swirling right now that we’ve got to make sure we don’t get caught up in all that stuff and just focus on what we need to do to get better these next seven weeks,” Edwards said.

But if there’s anything Edwards has learned about his team, it’s that its belief is unwavering on game day.

“Our guys, one thing I know about them thus far, they’ve never walked into a stadium, whether it was here or on the road, and didn’t think they had an opportunity to win,” Edwards said. “That’s a good thing, and that’s how I want them to feel. I want them to feel that way.

About Cronkite News 2604 Articles
Cronkite News is the news division of Arizona PBS. The daily news products are produced by the Walter Cronkite School of Journalism and Mass Communication at Arizona State University.