SAN CARLOS – As she looked at the Disney characters decorating the walls of the San Carlos Apache Healthcare Dental Clinic and at the smiling, laughing children watching dental health demonstrations, Suzanne Haney thought back to what a trip to the dentist used to be.

“Back then, it was so different, it was in the ‘70s you know, the treatment wasn’t great,” said Haney, a grandmother and primary caretaker for three children under age 8. “It made you afraid to come to the dentist.”

That was just one of the challenges facing health care officials on the San Carlos Apache reservation as they struggled to improve dental health of tribe members.

While 36% of kindergartners in the U.S. experienced tooth decay, according to the 2016 edition of the First Things First’s Children’s Oral Health Report, the average in Arizona was 52%, and among Native children it was even higher. Numbers specific to the San Carlos Apache were not available, but the report said that 76% of Native American kindergartners nationwide had experienced tooth decay.

The San Carlos Apache tribe is looking to change those numbers with events like the Oral Health Month program that Haney and close to 300 others attended in February.

“We decorate the place, and we spend most of the day bringing Head Start children and the community members and let them go through and see the dental department in an environment which is fun rather than stressful,” said Dr. Gregory Waite, the chief of the San Carlos Apache dental program.

Dozens of laughing children went from table to table in the clinic’s lobby, where presenters taught them different dental hygiene techniques or oral health tips. Visitors also got dental screenings and fluoride varnish treatments at the event.

“Most people don’t like going to the dentist,” Waite said. “We try to get them to see the dentist’s office in a different light, and we enjoy that.”

It’s part of the Strong Teeth Strong Kid campaign created by Native American Connections, an organization that has teamed up with other groups to raise awareness about the importance of dental care, especially for children age 5 and under. 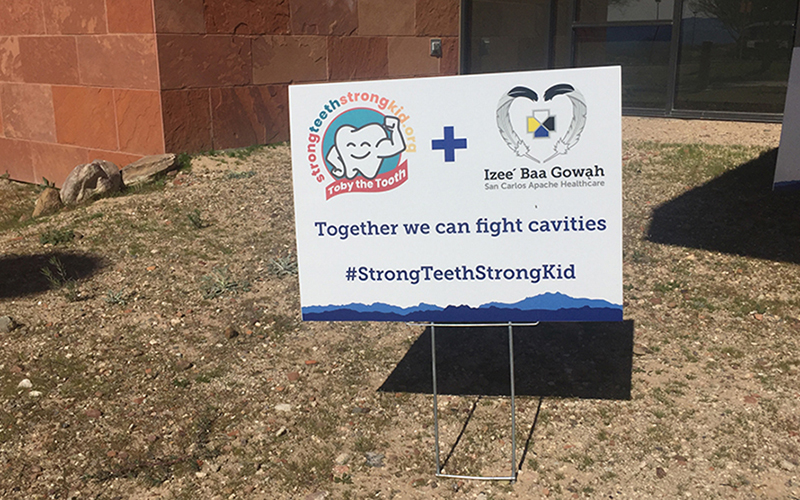 The outside of the San Carlos Dental Clinic looks like a typical dental office, but the inside was decorated with balloons and Disney characters to put kids at ease for an Oral Health Month event. (Photo Madison LaBerge/Cronkite News)

The campaign focuses on “s-milestones” – or smile milestones – that promote good habits like using a clean, damp washcloth to wipe milk or formula off a baby’s gums twice a day and twice-daily brushing when primary teeth begin to come in. It also focuses on education so parents know when to bring their children to the dentist.

Haney said adults would not bring their children in to the dentist because they themselves were scared. That rubbed off on the kids, she said, so the cycle continued. That was echoed by Corey Hemstreet, a health program manager on the Arizona Advisory Council on Indian Health Care.

Waite said that results from the campaign paired with the San Carlos Apache Healthcare “are going to take time, but we’ve already made some strides. There are a lot of kids out there now that have all of their work done, who in the past would not have gotten that done.”

It’s all part of a movement by the tribe to take greater control of its members’ health care. San Carlos Apache Healthcare CEO Victoria Began said that in less than five years, the tribe has more than doubled the services it offers.

Haney, who said her grandchildren got excellent care at the Oral Health Month event, credits the San Carlos Apache Healthcare team for caring about their patients – a change from when she was growing up.

“Now (my grandchildren) are not afraid to come to the dentist. You know, I used to have to go into the back with them, now they just walk back there,” she said. “It’s a really good thing for the people here.”