In his email, Ryan wrote:

December 31 is now 11 days away and it’s the biggest deadline we have this year. There’s so much at stake in 2014 I’m asking Patriots like you to pitch in one more time so we finish 2013 strong.

Ryan was right, Wooten is a patriot, but Ryan was wrong to think that a man, whose retirement he just cut, would consider a request for a $20 donation to the NRCC 2013 Emergency End-of-Year Fund.

In his email, Ryan urged Wooten “to stand up one last time this year.” So that is what Wooten did. Wooten did not simply delete the message. He shared his response to Ryan’s plea on his Facebook page. That message was shared by 8,963 people and according to Five on Fox (Fans) page administrator, Sean O’Reilly, over 400,000 people have seen the post.

Chief Master Sgt. Wooten served in the US Air Force from 1977 to 1998. For 21 years, he was stationed across the globe from Davis Monthan Air Force base in Tucson, Arizona to Osan Air Base, in Korea. A son of an Air Force non-commissioned officer, Wooten spent his entire youth living both abroad and at home in the U.S. and continued to serve his brothers and sisters in arms after his retirement from the Air Force. He took a civilian position in Kuwait in direct support of Operation Iraqi Freedom and Operation Enduring Freedom, and then relocated to Germany to support the U.S. Forces in Europe.

Wooten first formally registered as a Republican in 2008 to support the McCain/Palin ticket after returning from residing overseas. Wooten uses a military term to describe his feelings about the party, saying “the GOP is ‘hard broke’ and it’s going to take a lot to fix it.” He hopes that the GOP will start “leaning the way almost half of the country does.”  Conservative values have taken a beating, but he says, “I have learned that there are so many people that want this corrected and the GOP establishment offers no solution. People like me are hungry for a return to a country of common decency, where every disagreement isn’t racial and it’s not okay to kill babies, but it seems to a lot of us that the representatives in office are only concerned with staying there and not about the constituents they are supposed to be serving.”

Wooten, like many other veteran constituents, said he had no inkling about the possibility of cuts to his retirement payments. “Most folks think it’s a “benefit” or an “entitlement” but that couldn’t be further from the truth. The payments we receive are dollars earned during our 20+ years of service. It is a promise the government made to us,” says Wooten. “There are some, such as Rep. Ryan, that believe we’ve gotten too much for too little work. When President Clinton revoked our cost-free medical care for life, which we were offered in exchange for 20 years service, most of us factored that into our decision to stay for a full career. Since then, our medical benefits have eroded and our “free” care has seen steadily increasing costs. This is an issue of broken trust. Our government has and continues to renege on their promises for us, who gave more than most could tolerate.”

If he had an opportunity to weigh in on Ryan and Murray’s budget deal, he would have considered cutting foreign aid to U.S. enemies such as Egypt and Syria. He would have suggested cutting fraud, waste and abuse in government spending. Last week, Senator Tom Coburn noted that he could not get his fellow senators to consider anti-fraud reforms. Wooten said that the government is a “target rich environment” for reforms. 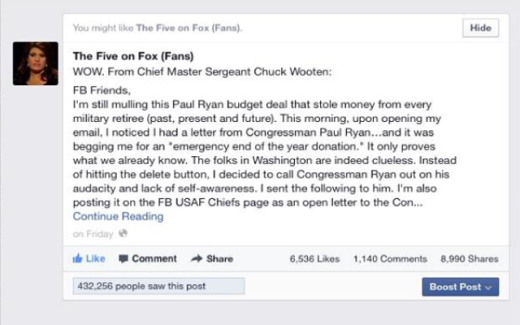 I’m still mulling this Paul Ryan budget deal that stole money from every military retiree (past, present and future). This morning, upon opening my email, I noticed I had a letter from Congressman Paul Ryan…and it was begging me for an “emergency end of the year donation.” It only proves what we already know. The folks in Washington are indeed clueless. Instead of hitting the delete button, I decided to call Congressman Ryan out on his audacity and lack of self-awareness. I sent the following to him. I’m also posting it on the FB USAF Chiefs page as an open letter to the Congressman. If you’re a retiree, I will tell you we may have lost the battle, but not the war. If you’re inclined and find it worthy, let’s flood social media with this letter and see if we can get some traction. Thanks.

Please note that this request by you for a cash donation from me is extremely unfortunate and very ill-timed. You see sir, I am one of the military retirees your “bipartisan” budget just impacted. You and every Republican (both in the House and Senate) that voted to pass this travesty betrayed and broke trust with me and everyone like me. You may not know us by name, but we’re the people, Congressman, who answered our Nation’s call, some of us at a very early age to willingly serve YOU and others LIKE YOU so you could safely attend college and pursue your personal ambitions without fear of harm.

You might also want to note that for at least 20 years, my brothers-in-arms answered that call of duty EVERY SINGLE DAY, without fail, without complaint, without enough money to sustain our loved ones we had to leave behind while we DID OUR JOB in every corner of the Earth. And for that service, we were given absolute assurance our so-called retirement benefits would be protected by law. The very law you shattered in your zeal to impress your Democratic cohorts in your back room deal–with the enemy. Yes, I said it. The liberal Democrats are an enemy to the American people and our Nation. Your lack of judgement and eagerness to compromise on the backs of us who protected you is sickening. Congressman, you and every Republican that voted for injuring military retirees have engaged in a complicit, sordid affair with the Democrats who’s objective has always been to dismantle the military. By climbing into their bed on this issue, you have confirmed you are absolutely no better than they and have proven it with your vote.

Congressman Ryan, the audacity which you display is noteworthy, but to unceremoniously snatch earned money from a small group that has added so much more value than the paltry $6B you looked to “save” (which is all smoke and mirrors and you know it), is reprehensible and insulting.

We have, despite the hardships, meager salaries and harsh conditions, have performed with honor and excellence…in silence, which is something most members of Congress have no idea about doing. Our job approval was, is and always be better than yours. We knew our mission and we got it done, then handed it off to a new generation in better shape than we found it.

Your ability to look us in the eye, take money from us (apparently there was ZERO, other source of waste within the federal government that you could have recovered this money from…right, got it), while simultaneously holding your hand out to beg (with passion) for our cash is stunning. Your actions have proven you do not have the tremendous intellect you’ve sold the American people on. I say, with all seriousness, Congressman, what you lack in intellect and spinal rigidity, you make up for in cajones.

I hope you and your cowardly, Republican “colleagues” hear a message from me loud and clear. You will NEVER receive another cent of financial support from me. Further, if you happen to be at a Capitol Hill dinner or at a K Street cocktail party with RNC Chair Reince Priebus, Rep. Ron Barber, Sen. Jeff Flake or Sen. John McCain, I would be honored if you communicate with them that I am launching an effort to ensure NONE of you traitorous “representatives of the people” ever receive another vote from a military retiree. Remove me from your contact lists.